The Android-running Microsoft Surface Duo (née Andromeda, under Windows 10) has been largely a USA-only story since launch, with just handfuls of the device making its way into company evaluation programmes in other parts of the world. So we're having to live vicariously for this smartphone, reporting on news and devouring review material from USA-based writers. In this case, WC's Zachary Boddy, a games editor by day and an occasional smartphone reviewer by night. Nine months after the Duo become available in the States, he finally got his hands on it as a main phone, armed with lots of updates and substantial price cuts. So how did he get on?

I've spent just over a month with a newly purchased Surface Duo, and have used Microsoft's experimental dual-screen device as my primary phone for just over a week. As a longtime phone and Surface enthusiast (read: nerd), I wanted to see whether the Surface Duo could feasibly become my only phone, as seen through the eyes of someone who hasn't owned the Duo since it launched nine months ago.

Another pleasant surprise was how the Duo's "outdated" spec sheet, featuring an aging two-year-old processor and a middling amount of RAM for multitasking compared to modern smartphones, managed to more than keep up with everything I threw at the Duo, including regularly running two apps at a time and quickly switching between different apps. Even without being a modern powerhouse flagship under the hood, the Duo still holds on to its title as "multitasking king."

Battery life joined performance by soundly destroying my expectations. The Surface Duo can't be considered an endurance champion by any stretch of the imagination, but a relatively smaller battery combined with two high-resolution screens meant I fully expected the Duo to struggle to last a full day. To my genuine surprise, I never worried about running out of juice, even with hours-long solitaire sessions, social media usage, and gaming. For me, at least, the Duo is a solid one-day phone that didn't have me constantly reaching for a charger.

Which is good to know - in fairness, almost any modern smartphone will stand up here - the days of battery life disasters are long past us in 2021. Android and iOS are supremely good at being frugal with power and processes.

The biggest surprise was in Xbox support:

If anything truly came out of the left field, it's Xbox Cloud Gaming on the Duo. If you aren't aware of what Xbox Cloud Gaming is, it's Microsoft's game streaming platform that lets you play full-blown Xbox console games on your mobile device, tablet, or PC. Recently, Microsoft added official Xbox Cloud Gaming support for the Surface Duo, and the experience is genuinely impressive.

Players can take one of the best Xbox controllers and prop up the Surface Duo like a tent or laptop for mobile Xbox gaming, or they can transform the Surface Duo into a ridiculously close rendition of the Nintendo 3DS with customizable and individually tailored touch controls positioned on the bottom display. I won't go too far into depth on this, as I've already discussed at length why Surface Duo and Xbox Cloud Gaming come close to the Xbox handheld dream. 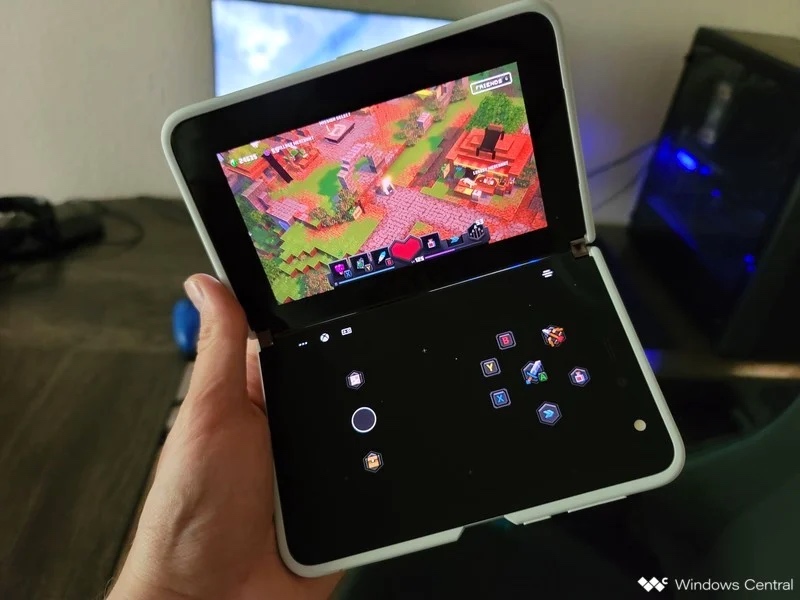 Where the Surface Duo fell down for Zachary was exactly where it would fail for me in terms of replacing something else from the modern world:

Hardware omissions like the lack of 5G, no NFC, and (most critically for me) no Qi wireless charging are all features I enjoy and use on my Note 20 Ultra. The camera on the front of the Duo is usable (most of the time), but its quality is subpar at best and awful at its worst. Everything that makes the Duo's hardware and design exceptional also contributes to its fragility and durability concerns, like plastic frames that can lead to bending and cracked charging ports.

I'd add to those a single weedy earpiece speaker - I've become so used to punchy stereo speakers on every main phone I've owned since 2017. Making media watching a pleasure - though not on the Duo, with its odd aspect ratios and poor single speaker!

If you're truly interested in the Surface Duo and are a tech or phone enthusiast, like I am, you may find the Duo's recent price cuts to be too attractive to pass up. If that's you, then you'll probably really enjoy what the Duo has to offer. If you're looking for your next phone and are willing to wait, however, I recommend holding off to see what the Surface Duo 2 has to offer. We're expecting massively updated hardware with Duo's successor, and Android 11 is expected to bring much-needed enhancements to the software experience. Surface Duo 2 may break ground this September or October, so we also don't have long to wait.

Microsoft's long-awaited return to smartphones, the Surface Duo, packs unending potential that just isn't met in its first generation, even after nine months of updates.

Well, you can see why we haven't stumped up £1300+ at 'All About' Towers to buy one just to review it - and Microsoft's PR team in the UK just isn't set up to handle the Surface Duo, sadly. On the plus side, it does look like the Surface Duo 2 will be the one to watch, though expect the price to be sky high at launch, even in the USA.