How to see photo EXIF data on the iPhone

It's a simple enough question: how do you see EXIF data on an iPhone after taking photos? But the answer isn't simple... yet. I wanted to note that in a few months time, when iOS 15 arrives for all iPhones, EXIF data will be 'surfaced' for the first time on the platform. Yet until then there's also a simple app solution that will cost you the grand total of... a dollar. Or a pound, etc. Which will tide you over nicely until Apple's new OS and Photos version hits later in the year.

By default, in Photos under the current iOS 14, you can see exactly where a snap was taken (subject to you having Location enabled for Camera), but that's it... for now:

The (well, mildly, in the grand scheme of things) exciting improvement in iOS 15, coming later in 2021, is that Photos will gain an 'Info' control. This will pop up full EXIF data, see this example from MacRumors: 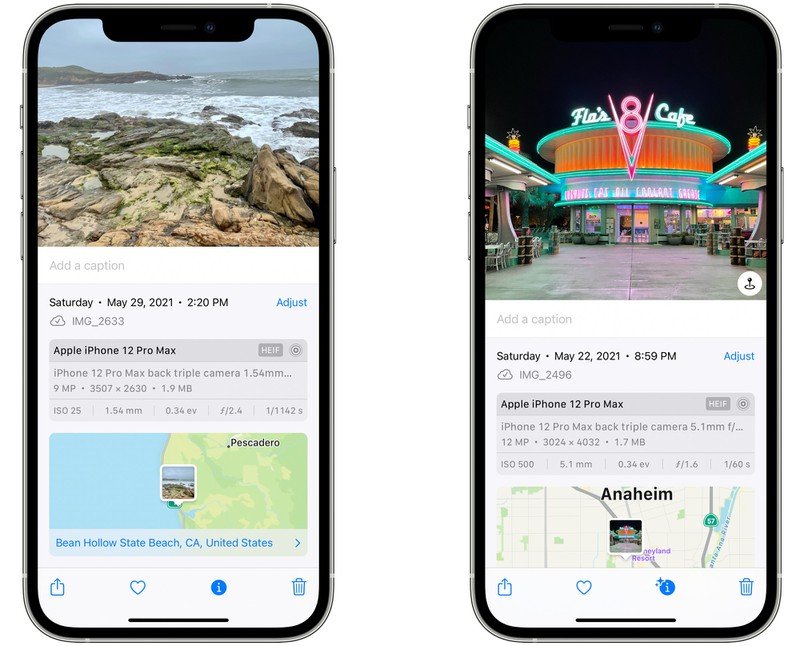 Of course, EXIF isn't everything in these days of multi-frame, composited photos, but the data can still be useful. For example, to tell if a photo was taken on the main, ultra-wide or telephoto camera - however much you may have fiddled with zoom, the aperture stated will give the game away, etc. So take EXIF with a pinch of salt, but I'd still welcome the ability to see what's stored.

Now, you could also just send the photo to a desktop (AirDrop, import, whatever) or to the cloud (OneDrive, Google Drive, etc.) and use a cloud interface to see some photo details, but there's an even easier way and that's to use a small third party application.

In this case, ViewExif, a quid in the App Store, and demonstrated here:

True, there are other photo utilities on iOS which surface this information, but hey, it's what I use. At least until iOS 15!

Filed: Home > Flow > How to see photo EXIF data on the iPhone