There are reviews of smartphones online and there are GSM Arena's reviews. Their labs go into detail that you simply won't find anywhere else, including speaker EQ and loudness, display contrast, and much, much more. And so, given that I'm giving the 13 line a miss this year as an upgrade that I just couldn't justify, I'm deferring you to the GSM Arena team, with extracts below.

[cross posted to AAWP since the images come from its server because AAM still isn't finished! Also, it's hopefully of general interest.]

So, from the GSM Arena iPhone 13 Pro Max review, from the introduction first of all, which should bring everyone up to speed:

Not just the best iPhone ever, but also the one with the 'biggest camera update ever' - that would be this year's iPhone 13 Pro, which we have here in Max size. Joining those larger and better cameras, we have a high refresh rate display, more battery, the mandatory chipset upgrade - the 13 Pro Max ticks all the boxes for improving everything that's important. We're here to see by just how much.

The advancements in the camera system start with a new primary unit with a bigger sensor and a brighter lens. The ultrawide module also sports a brighter lens, but one that features autofocus - a first for an iPhone ultrawide. Then there's the telephoto which now offers improved reach up to 3x, albeit with a slightly dimmer lens. On the front, things have remained the same, and no, the 20% reduction in notch size doesn't count.

Finally giving in to market trends, Apple's fitted the 13 Pro and Pro Max with 120Hz displays - or, rather, ProMotion. They're the adaptive kind, theoretically capable of variable refresh rates to reach all the way down to 10Hz to preserve battery. That's in addition to an already great screen feature set that includes DolbyVision support, plenty of brightness and excellent color rendition.

2021 iPhones all come with increased battery capacity, and in the 13 Pro Max' case, that's an 18% bump - 2.5 hours more than last year's Pro Max in Apple's metrics, or 'longest battery life ever on an iPhone', and all that.

As usual, a new year means an upgraded chipset, and alongside freshly named CPU cores and higher clock rate, the A15 in the 13 Pros also comes with an extra GPU core on top of the non-Pros. Somewhat related, the 13 Pro Max can be specced with up to a full 1TB of storage - that should be useful for iPhone filmmakers if no one else.

One aspect which I'd heard was a huge improvement turned out to be something of a damp squib. The 13 Pro Max's speakers were supposed to be significantly better, yet GSM Arena's detailed testing revealed almost identical results to those in the iPhone 12 Pro Max:

As we've come to expect from iPhones and, really, all top-level phones, the 13 Pro Max put up a great performance in our speaker test. It earned a 'Very Good' rating for loudness, same as all key competitors. It's the best sounding one among this tough crowd with the closest thing to bass, lively vocals and sparkly highs.

I did my own testing last weekend, putting the 13 Pro up against my iPhone, in a quiet enclosed space, and results at maximum volume for my test music were - again - identical. So I'm not quite sure what other reviewers are comparing the speakers with... GSM Arena's reviews page has an interactive demonstrator, where you can play through a number of songs and hear the recordings each phone's speaker set, along with EQ and loudness: 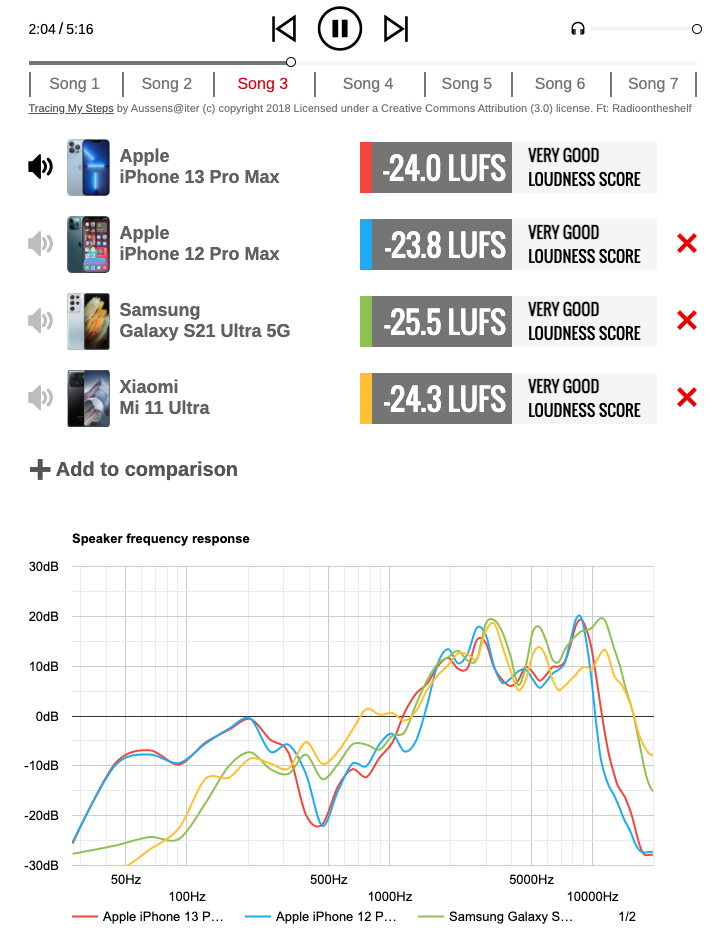 Of particular note is that the iPhones have dramatically better bass audibility - this is because the iPhone's audio processing has, for years, octave shifted frequencies below about 200Hz - so you get to hear bass in a song, just not at the low, low frequency that a larger speaker system might render it!

Then, from the GSM Arena conclusion:

The biggest camera update ever on an iPhone might go unnoticed if you don't take photos of small things from up close and if you don't go out at night and if 2.5x zoom is the same as 3.0x to you (it probably objectively is). Then there's the matter of the unified processing that renders hardware differences smaller than they seem. And if you can't see the difference between 120Hz and 60Hz (or care for it), or if your battery life is good enough - which, let's face it, it is on your 12 Pro Max, then perhaps don't upgrade from the 12 to the 13 and wait for the major updates expected on the 14.

Which exactly matched my own thoughts and verdict. They carry on:

Conveniently, if you're after a big iPhone now and coming from an older Apple or from outside the orchard entirely, the 12 Pro Max has been discontinued in most parts of the world, so that's easily settled - 13 Pro Max it is.

If the 'big' part isn't as important, the 13 Pro will mostly deliver in the other areas - it has the latest cameras and the 120Hz display. Battery life may not be as earth-shattering on the small one, and that's the only potential drawback for going small that we can think of.

The 13 non-Pros make less sense in this context since they don't bring nearly as much to the table as their more advanced stablemates. Then again, there will be those that just want any new iPhone, or the smallest new iPhone, or the very likely last iPhone mini - the 13 and 13 mini will serve those just fine.

Nicely summed up, GSM Arena. My own primary SIM is back in the iPhone 12 Pro Max after the release of the really nice (if still a little buggy) iOS 15 and I don't feel like I'm missing out on much by not going to a '13'.