Michael Fisher is one of the biggest YouTubers who's also open to 'think different', in terms of smartphones, accessories, folding, and extending. In the video below he takes the NexDock 360 and a variety of smartphones (and cables!) for a real world spin, an overnight trip sans laptop. His verdict at the end of a tremendously detailed video? That the tragedy of DeX (and Continuum, 'Ready For', etc.) is that it's almost useable. Almost. With a capital 'A'. It's good enough that you can envision this sort of smartphone extension as 'the future' - but it's also buggy and problematic enough in terms of current hardware and software that you can't live with it right now, even seven years after Microsoft first delivered Continuum and over a decade after Motorola tested the ground with its Atrix system.

Which all sounds about right and I've been through numerous NexDocks and hubs across two phone platforms to come to the same conclusion. DeX/Continuum/'Ready For' have always been more tech demo than tech essentials.

PS. Bonus photo from Nokia World 2011, with the All About team of the time, including yours truly working ON a Motorola Atrix system! This was a full eleven years ago and I concluded at the time that the downsides and restrictions of a phone-driven faux-laptop just weren't worth it when used for real work. Seems like not much has changed in 11 years, but I don't blame the tech - I blame manufacturers for just toying with the concept rather than investing in it fully. 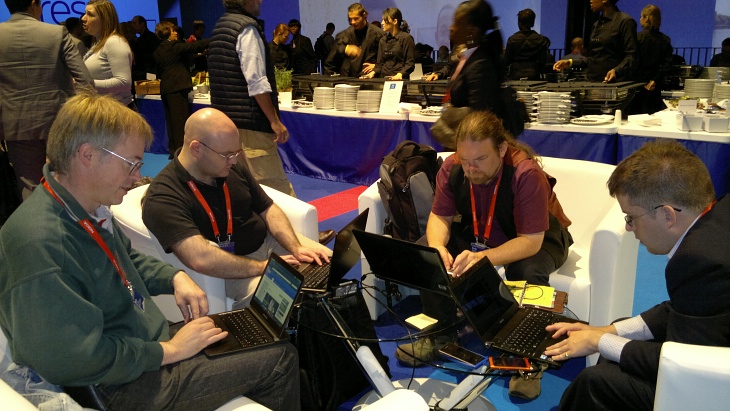