Onto their fourth generation of lapdock now, and keeping alive the Continuum vision, NexDock is persevering through pandemics, industry changes, and component shortages. This is the NexDock 360, just in for review, a Continuum/DeX (etc.) lapdock that adds an extra twist to 2020's NexDock Touch. Here's my first impressions and hands-on gallery, with both Lumia and Samsung as host phones, the full review will follow.

Happily, I still have the NexDock Touch for direct comparison, though note that this is no longer available to buy new. Also, note that the NexDock 360 is now $370, after a pre-order period at $270, so we're talking about an accessory that has ended up fairly pricey. As to whether it's worth it, you'll have to wait for my review. In fairness, we're now talking about a product post-Covid and produced with huge supply chain constraints, so higher prices are appearing for tech right across the board.

As a reminder, the NexDock range acts as a HDMI monitor and integrated full keyboard and trackpad, turning a smartphone into a laptop, effectively, and adding extra ports and slots along the way. The 360 model adds extra use cases with its 'tent' and tablet modes, letting you use it more effectively for media watching or taking notes, respectively.

I'll comment on the quality of the display, speakers, ports, and so on, in my full text and video reviews.

As usual with our galleries, click images to expand them and scroll down a little if needed (on shallower or lower-res displays) to see any comments:

The clear leaflet - which could do with a little English proof reading, but everything's well labelled and any geek will get to grips with what's possible very quickly.

The NexDock 360's 'twist' over the original NexDock Touch is that the hinges are 360 degrees (much like the Surface Duo!) and the device can be folder right around and flat into a tablet!

High on the left of the device is the Type C port for the likes of the Lumia 950 and Samsung Galaxy flagships to plug ingo. This includes video-in, plus USB handling of touch, trackpad, and keyboard. Everything you need for Continuum and DeX, plus there's the option to charge the phone while plugged in, too!

Here's the mini-HDMI port, used with the supplied adapter to plug in a full size HDMI source, e.g. from a media player, Raspberry Pi, or simply to use as a second screen for your laptop.

Four rubber feet and screws break up the all-metal bottom cover. Always nice to have exterior surfaces as metal and not cheap plastic.

Finally, there's a multi-purpose Type C port, into which you'd typically plug a drive/disk of some kind. Or perhaps a mouse if you'd rather control things that way? Or even a USB hub and then you can route through Ethernet and multiple peripherals? 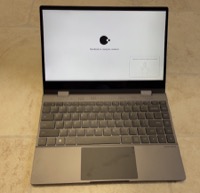 Opened for the first time, you get a decently large screen (slightly smaller than the NexDock Touch's, but then the whole accessory is smaller and lighter) and a visual prompt of how to bring up the on-screen controls.

The keyboard, as before, is splendid, with nice action and plenty of function keys. 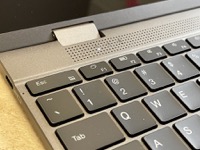 The grille above the keyboard has three status LEDs and four speakers embedded in it. They're not spectacularly loud, but are good enough for casual YouTube watching, etc.

The keyboard wrapped round to put the NexDock 360 in 'tablet' mode...

The grille above the keyboard has three status LEDs and four speakers embedded in it. They're not spectacularly loud, but are good enough for casual YouTube watching, etc. Though do note that if you're in tent or tablet mode then the speakers are facing away from you, which is unfortunate! 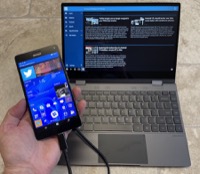 Hooking up a (e.g.) Lumia 950 XL works just fine and touchscreen Continuum is a 'go'. Which is a relief, as the NexDock Touch had slightly different electrical tolerances and wouldn't work with Lumias out of the box. 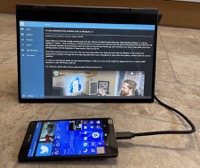 Still hooked up to th a Lumia, but this time in 'tent' mode and browsing the AAWP universal app on the big screen! 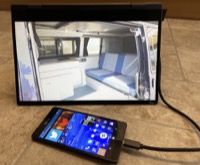 Going full-screen in the MyTube UWP app, watching some YouTube... 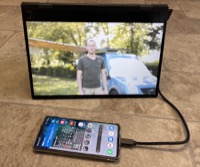 And again, but this time driving this with Samsung's DeX desktop, here from a Galaxy S20 FE... 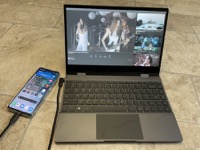