Minor apologies for two quick updates to this 'reference' article in a few days, but I've added the rather excellent Samsung Type C to 3.5mm DAC/dongle, plus made numerous extra tweaks to the table, including quoting maximum sample rates and resolution where known. Here I look at wired audio quality from smartphone 3.5mm jacks (where they have one) and from add-on, plug-in DACs/dongles (where digital output is the only wired way forwards). Worth bookmarking, hopefully, and coming back to later in 2021, since I'll keep updating it as needed.

(Original opening paragraph!): Despite Apple's (and then Google's) attempts to quosh the humble wired 3.5mm audio jack on modern smartphones (and copied by many others), plenty of smartphones are still sold with jacks and with DACs feeding whatever wired headphones you care to plug in. Potentially higher quality, and certainly no issues with drained batteries or lost AirPods (etc.) In this big 2021 update of an article from 24 months ago, I test a variety of existing smartphones and (especially) standalone DAC/dongles, the former where they have jacks and the latter where output is digital and needs converting. In other words, here's how to make sure you can plug in your favourite wired 'cans' for years to come! 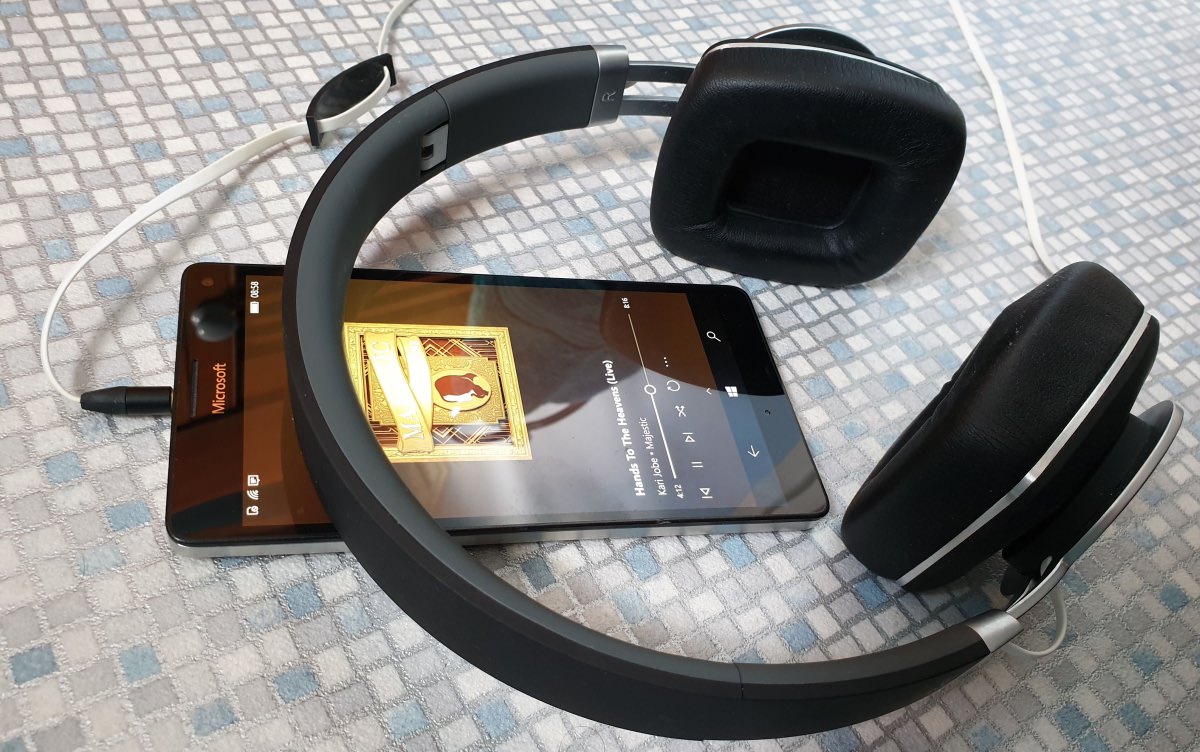 NOTE: I've kept the original comments intact, but please do chip in with new ones!

As ever, writing about audio isn't trivial, since your ears can't be here to try things and comment with me. So I'll have to run through some of my methodology before launching into actual tests.

A few basics though. I'm testing wired audio here, hopefully through a 3.5mm socket in the phone. But, recognising that in 2021 most Android phones over about £500 (plus all recent iPhones) have no 3.5mm socket, I've also set about testing external DACs/dongles*.

* from one of our own recent reviews:

The 'confusing' element comes in that many Chinese phone manufacturers (e.g. Huawei) have a DAC (i.e. digital music to analogue audio) inside the phone and output music through unused pins (SBU1/SBU2, plus voltages on D+ and D-), meaning that a 'dumb' adapter for £1 on eBay that literally passes through connections to a 3.5mm socket and with no active circuits, will work. This is OK if you have such a phone but it's worth noting that this approach to audio in a Type C world isn't recommended (by the industry). And if you plug such a dumb adapter into a Google Pixel or Samsung or Nokia (etc) flagship phone then nothing will happen.

Digitally cleaner, more standard, and with higher audio quality and lower noise, is for digital audio streams to leave the Type C jack via USB 2/3 data pins and then a DAC in an accessory (or headphones themselves) can do the conversion to analogue away from the electronic noise of the phone's chipset.

Why 'DAC/dongle' as a term? Its clumsy, but 'dongle' on its own is misleading because it can look identical, whether dumb or with a DAC. The easiest way to tell up front is to look at the price. Dongles with DACs in (as here) are around the £10 mark at minimum, since they contain plenty of advanced circuitry. And often veer through £20 upwards, with £100 or more for really serious (and bulky) kit. Whereas the dumb analogue dongles are dirt cheap and much less than £10. That's how you tell, short of them having them in your hand!

In each case, the smartphone's music application (or video, etc.) takes a digital music source (whether local or streaming) and uses the Digital to Analog Conversion (DAC) capabilities of the phone's hardware (either in the main chipset or as a standalone sub-system or perhaps in a DAC dongle) to produce 'analog' voltages, for left and right channels and with a common ground. Leaving aside microphone complications, these analog voltages are turned into tiny speaker movements in your chosen headphones and - hopefully - you hear music in your ears.

And if that seems complicated enough, there are plenty of other variables:

Now, there's not much that can be done for the last point, but I can certainly address the first two (and you should too), in selecting my test material and equipment. I tried to pick from a range of music genres, settling on, all at 320kbps MP3:

I did my listening through my much-loved and much-used Veho Z-8 over-ear studio headphones - they sound fantastic and as I write this (by coincidence!) are currently on Amazon UK, at £29. Just saying. These were originally over £50. Here's my Z-8 review from back in the day. I know, I know, audiophiles are going to say that I needed to use £200+ headphones as my reference, but I trust these Z-8 and have lived with them for several years. I also tested with my (equally loved but smaller) Marshall Major II, which work in wired mode (here) and Bluetooth if needed (e.g. when exercising). The Major II are now hard to get, but I see the Marshall Major III wired set are only £57 on Amazon UK.

And so on with the testing. Obviously, you're not here with me to listen yourselves (and doing a video or audio sample wouldn't help, since you'd then be at the mercy of the audio capabilities of however you watched/listened), so you'll have to rely on my scoring. Hey, it's all only a guide and I'm more interested in the relative differences, i.e which phones/DACs are better and by what margin?

Finally, I can only report on what I have to hand. You'll have to infer audio quality from related hardware. I do give some idea below - manufacturers usually re-use the same chipsets and (of course) music and video applications across their ranges. The list just constitutes data points.

And, this being AAWP, I'll start with some Windows-powered phones, and then follow with other candidates, including some from this year. I've coloured any score of 35 or over in green, to indicate 'good'. Anything scoring 34 or less is average or worse, so consider with caution, etc.

Notes:
All phones were tested with 'flat' EQ, i.e. testing default output. Most smartphones (including the Lumias here) have an extra software Equaliser than can be applied to some (or all) output, but these are just software EQ effects and muddy the testing waters too much. This is analagous to me testing phone cameras on 'auto' and not in a 'pro' mode, where things get exponentially more difficult to compare.
§  By which I mean other phone models which will sound the same, usually because they're sister devices in a range.
+  Different DACs put out different amounts of 'oomph'. A decent audio amplifier will easily drive headphones with 'volume to spare', while on lesser chipsets you'll be at maximum volume on the phone and no headroom to increase it further. For example, the Alcatel IDOL 4 Pro puts out so much volume in my headphones at 23/30 while the Wileyfox Pro at 30/30 isn't loud enough.
++  I'm listening for rendering bass right down to 20Hz and lower - I like to hear bass guitar notes in their natural entirety, as if I'm standing by the bass amp (I play guitar and bass) and hearing the subtleties. Most headsets fall down here, providing insufficient (or software-boosted) bass.
*  I'm listening for details in voices and percussion, with no compression artefacts - again, as if I was in front of the singers or percussion, hearing them 'live'.
**  Poor smartphone audio often results in weak stereo separation, with too much common ground between channels. I'm also rating here for an overall impression of fidelity. And, yes, enjoyment.
*** The Gemini version is marked down because of horrible static on the jack when music isn't playing. Clearly electronic issues in the design (and that's not counting Planet wiring the stereo speakers out of phase on BOTH devices - gah!)

What became apparent, somewhat surprisingly, is that music output and enjoyment on smartphones is less about absolute audio rendering, i.e. less about how well the full range of frequencies could be output for a given audio source (though there are differences), and more about sheer volume/voltage. We've all been there - in a noisy city street and trying to really enjoy our music and even at a phone's maximum output it's only just loud enough. This is where the best music phones have volume to spare. (And no, I'm not going down the 'loud music will damage your hearing' route - I'm assuming that you're being sensible and not overdoing it or for too long a sustained period.)

Most phones in 2020/21 don't ship with dedicated DACs or power amps - they rely on the DAC in the main SoC (System on a Chip), i.e. audio rendering is now included at 'good enough' levels in the Snapdragon/Mediatek processor so there's no perceived need to have extra audio chips. As a result, many of the scores from 2020/21 smartphones are similar. At (say) 33 points above, they're not spectacular though - audio is designed for the man in the (quietish) street listening to the Top 40 'tunes'. Anyone wanting to hear music properly needs to look further. To a smartphone with better DAC, or (more likely) to plug in a Lightning or Type C DAC/dongle, with some decent candidates above.

The IDOL 4 Pro, my favourite Windows 10 Mobile phone, and the music-specialist (and now sadly obsolete) Marshall London, running Android, came top, both with dedicated music chips/amplifiers and some serious output. Along with the (sadly discontinued) Sonata HD II DAC, which still stuns. Plus any of the Lumias from back in the day - Nokia and then Microsoft knew how to put together a smartphone (it's not just imaging). Sigh. The Sony Xperia 5 II is a modern flagship that is impressive in many ways, not least with a dedicated DAC/power-amp, though its lack of Qi charging might be a showstopper for some regular readers.

Of the (still available) Type C DAC-dongles, the Samsung one struck the best balance of volume and fidelity. It would be easy to dismiss such tiny electronic components, but many can absolutely do the job (the Apple Type C one is odd, with universally panned low volume output). It's good to know that if we do end up going down a jackless, Type C-only route, that wired audio quality doesn't have to suffer, even if we do have to put up with extra bits of wire and plastic hanging off our phones.

Although I'll be testing some more expensive DACs in the future, I love the £10 price point because these are small gadgets that WILL get lost in daily use. I got up to about five Apple Lightning ones before I started finding them as fast as I lost them! And at £10 each you really can buy a few and have them semi-permanently on the end of each favourite pair of wired headphones.

PS. Of note in 2021 is that Bluetooth 5 is now firmly established and (after a decade of my criticising it) wireless audio is demonstrably good enough, depending on the DAC in the earpieces and speaker set-up, see my various assorted Bluetooth audio reviews here on AAWP: