Just how practical is solar power for keeping your smartphone going?

It's an idea that I've toyed with over the years, and prompted by a recent submission for review of a solar-powered smartphone power bank (link below, it had a design flaw!) Now, I'm in the UK and the sun isn't exactly a reliable resource, but hey, picking a sunny day or two in early Spring here, I applied some science to the solar idea. Using my trusty Choetech 19W tri-fold panel, I've been taking measurements and doing some maths...

The main issue with charging anything from the sun is, of course, that the latter is inconsistent, whichever country you're in (though more than most in the UK!) You can't just plug your smartphone into a solar array and hope for the best. Far better to have a joint array/power bank system, so the sun's power is stored up in internal Li-Ion cells and then released on demand in the usual way via USB-A or Type C ports.

The review solar power bank, by the way, is this one, also available at a fraction of the cost and with other colour schemes from cheap Chinese sources. Unfortunately, there's a fundamental design flaw, in that the power switch pressed against a microswitch mounted at right angles to the main PCB inside, so that after a few presses the plastic and solder give way and the unit can't be turned on anymore. Great shame - I loved the concept!

In fact, data points welcomed if you have a more reliable solar power bank that you can recommend. But for the sake of this feature I think it's safest to separate the solar panel and power bank functions so that if one half stops working then you don't have to throw away both! 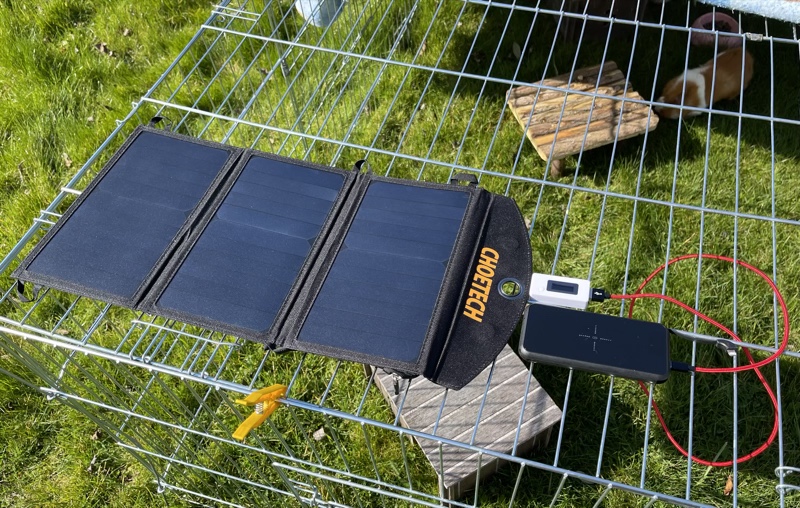 So, using the Choetech array (it folds up, is reasonably portable, has dual outputs, is rain-proof etc.) on both a sunny and an overcast day (in the UK spring), I had it wired through a simple voltage and current meter, then on into my favourite digital power bank, all laid out on top of our guinea pig run(!) With a readout, this made it a piece of cake to check all numbers concerned. 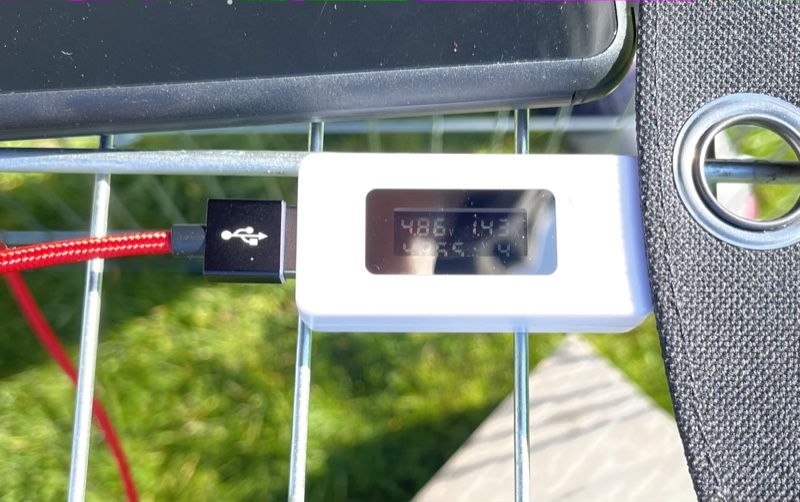 Do note, mind you, that there are systemic errors in power bank stats because of the voltages and power losses involved. So, for example, this power bank claims to be "10,000mAh", but that's at 3.7V. The power bank gets charged via a standard 5V source (here, the sun/panel) and although it would be nice to think that internal transfers were loss-free, my gut feel is that there's a roughly 20% inefficiency in the voltage conversion and wiring. Which more or less matches the step down from 5V to 3.7V, meaning that 10,000mAh delivered from the sun at 5V will fully charge my 10,000mAh power bank's 3.7V internal cells.

Similarly, in order to deliver charge to a connected device, the internal circuitry of the power bank has to ramp up the voltage back to 5V, again with a (roughly) 20% power loss. So, typically, draining my 10,000mAh power bank to 5,000mAh would actually deliver around 4000mAh at 5V. (With more losses in the receiving smartphone's charging circuits - hopefully you're detecting a theme here!)

But as a rough approximation, as you'll see from my results in chart form, the test '19W' (each of its two USB ports maxes out at 2.4A, but I'm only using one here) solar array puts out enough over the course of three hours in a moderately sunny day (in the UK, with the array laid flat, as shown) to put 5000mAh into the power bank, itself enough, after more losses, to fully charge many current 2021 smartphones. The sunshine data is the blue line below:

While 'overcast' conditions (the red line) would achieve the same 5000mAh but only after five or six hours outside, i.e. the entire day open to the sky. If you're interested, my gadget recorded a peak of 1.9V at noon in the sun, and was down to 0.9A on the cloudy day, which sounds about right.

But, we now have an easy to remember metric:

One day of sun into one power bank = a full charge of one smartphone.

Which is nice enough as a rule of thumb, but what if we do some maths and want to scale the tests up to cover varying weather conditions? And it's at this point that we should consider the possible real world use cases. Away from Covid-19 restrictions, you know, when we're allowed to go camping and hiking and generally enjoying ourselves outdoors.

The use case for needing solar is that there's no mains electricity (or 12V, e.g, from a car) for multiple days on end. With the carabiner hole on the Choetech array, if not laid out on the ground then I think the idea is that you have it strapped to the back of your rucksack while hiking, or perhaps to your bike paniers when cycling. Either way, the solar accessory can be fed into a small power bank like the one here - there's even a zipped pocket for it all here, which is really handy. Then, arriving at your destination for the day, many miles later, you take out the power bank and find that you've gained a full smartphone's worth of charge - or more, and you can plug in overnight to refresh as needed.

Which is all - doable, even on overcast days, if you're out for the whole day. Now, what if you had to charge multiple items, say your partner's (or friend's) phone as well? Even with full on sunlight and assuming that your movements could keep the solar array pointed towards the sun all the time, you'd do well to get 10,000mAh out of something like this. At least from one port. Happily, many arrays (as with this one) have two output ports, so I can't see why you couldn't have twin 10,000 mAh power banks along these lines - they're quite small and not too heavy. A USB cable to each of them, have it all within the zippy compartment, and each of the power banks should get 5000mAh or more per day. 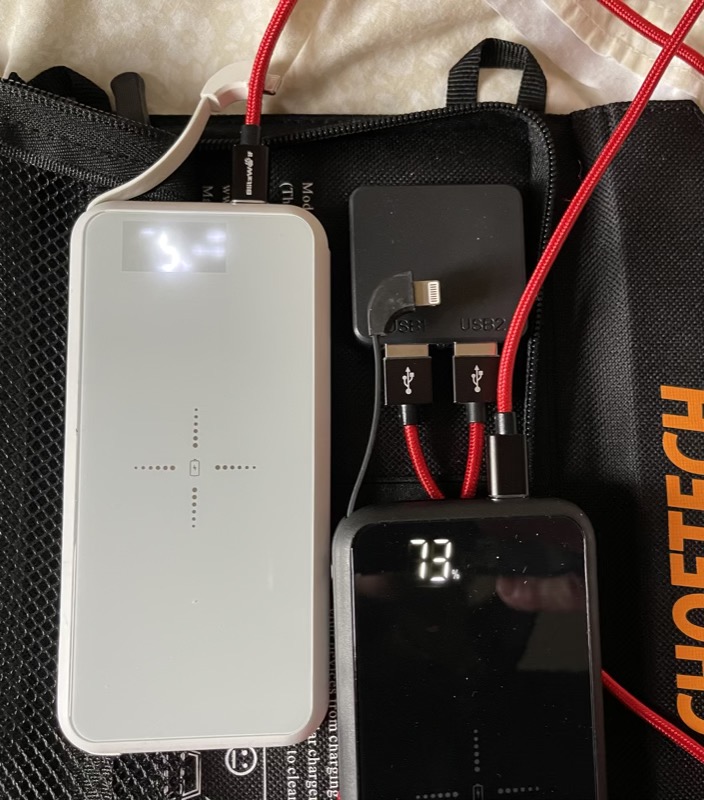 My white and black Qi 10,000mAh power banks, plugged into the two solar array output ports. (As usual the LED display on the white one doesn't play well with short shutter speeds and 'loses' segments in photos!!)

So a little overkill in the hardware department, but the maths works, and so should your multiple phones, potentially for many days at a time away from civilisation.

Of course, all of this is extremely niche. Despite being interested in the technology and a keen walker and cyclist (in good weather), I've only taken this solar array with me once in two years, and even then it never got used. We've become so used to there being some form of power wherever we go (e.g. camp sites, vehicles), plus there are some great 30,000 mAh power banks (e.g. this one) that will keep a couple of phones going for many days, so just charge at home and that that, etc.

But it's still fascinating, as the world of 2021 becomes ever more eco-conscious. I want to see more solar accessories, I want to see solar power banks that are robust and reliable, heck, after a long and miserable winter (in the UK), maybe I just want to see the sun for more than a few hours!