In the latest in our occasional series on smartphone photography, I may have moved on from a Lumia as a day to day phone, but the ideas and ambitions are still there. In this example, I take advantage of 'bluebell week' in the UK, the flowers are only at their best for one week in the whole year. Just how arty could I get and what should I put in the frame?

My series 'Anatomy of a Lumia photo' (here's #1) has proved popular, even though I cheated with the HP Elite x3 instead for #2. #3 had a lovely clock, #4 was all about framing, in #5, I got down and dirty with nature, in #6 I had a rosy dilemma to solve, and in #7 I took a satisfying low light snap in appalling weather. In #8, I got extremely close to an impressive moth, in #9 Andrew Elliott was in Budapest at night, in #10, I was shooting in early morning sun, in #11, I shot 'wide', with a little help from Panorama mode, in #12 I kept repositioning and zooming until I got a water fountain just right and in #13, Jeff Appleton got a good look at The Northern Lights. Then, rounding off the series for its previous run (in 2017) was #14, looking at a glowing tower. Resuming in 2019, here's #15, looking at framing a waterfall and pond, #16, steaming to the seaside with angles and perspectives, #17, 'Remembrance', creatively shooting a Remembrance Day display at night, and finally I returned to the graveyard featured in #18, but this time with oodles of December fog to add atmosphere.

The device used here was again the iPhone 12 Pro Max, but as before I suspect that a Lumia 950 XL or even a Google Pixel or Huawei flagship would have managed much the same result, since light was good and the subject 'simple. 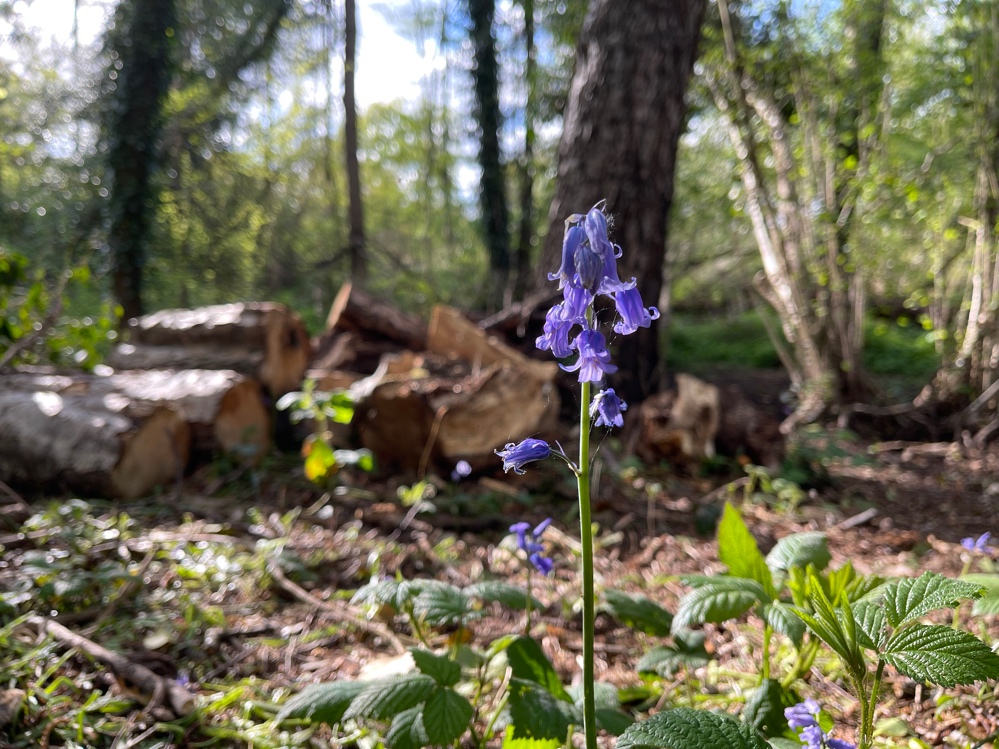 Which I'm pretty pleased with, though it's worth following along to see my thought processes, hopefully.

The arty aim was to capture something striking to do with the thousands of bluebells in a local wood. Starting with a typical, pretty landscape, shooting in 16:9, for obvious reasons: 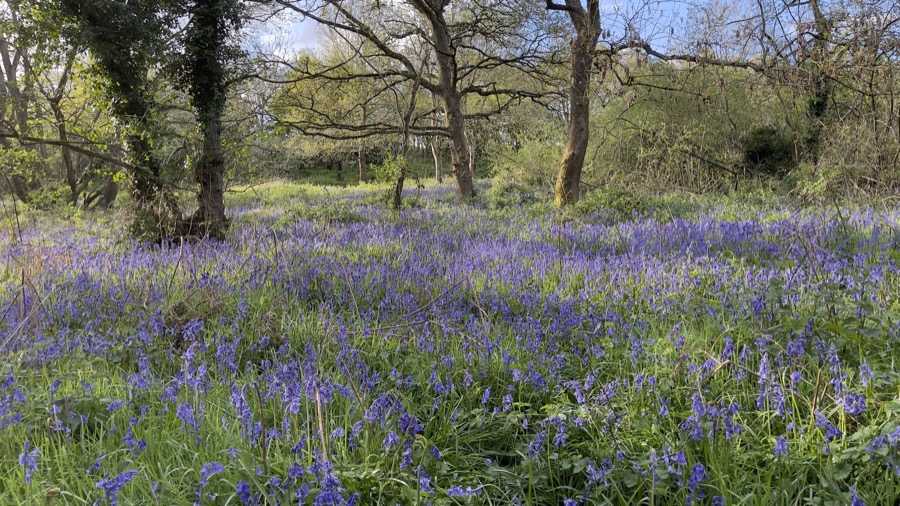 It's a nice snap and I remembered to use ProRAW mode on the iPhone, to stop it applying any edge enhancement to the mass of natural detail - I wanted as much of the latter as possible. So yes, a decent photo and one that would look good as background wallpaper on a desktop, for example, but  anyone could have taken that shot, I contend, and there's not much imagination involved. You just had to make the effort to be there and press the shutter control.

So I started to think about close-ups of specific bluebells. Kneeling down, here's my first attempt: 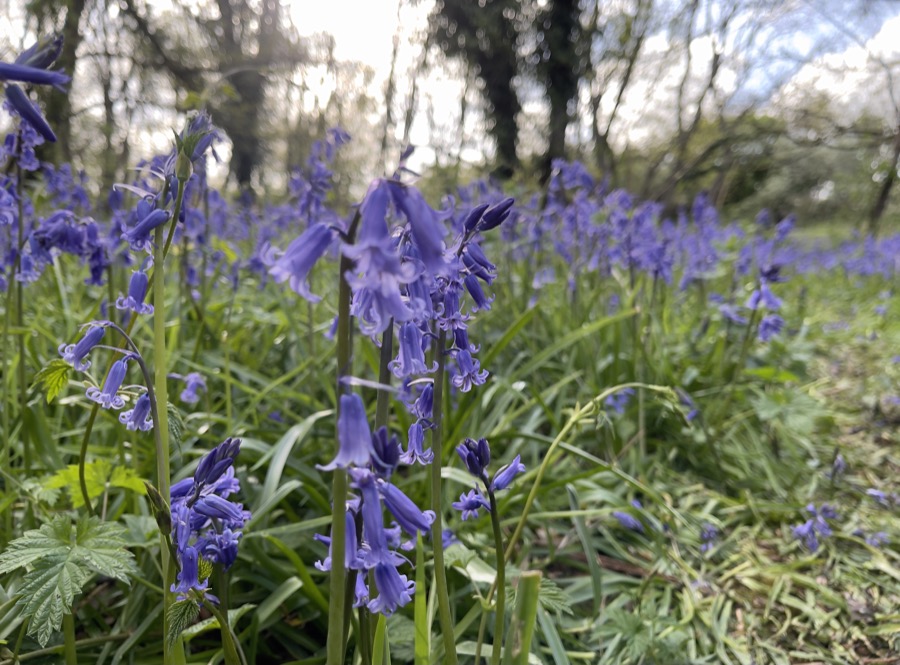 Nice idea, but the depth of field is so shallow with modern flagship phone cameras that relatively few of the foreground bluebells were in focus. And, with so many of the flowers, I couldn't see an easy way to solve the problem. I went on the hunt for a floret that stood alone and slightly higher than the others, I knelt down even lower and shot slightly upwards (still in ProRAW mode, by the way): 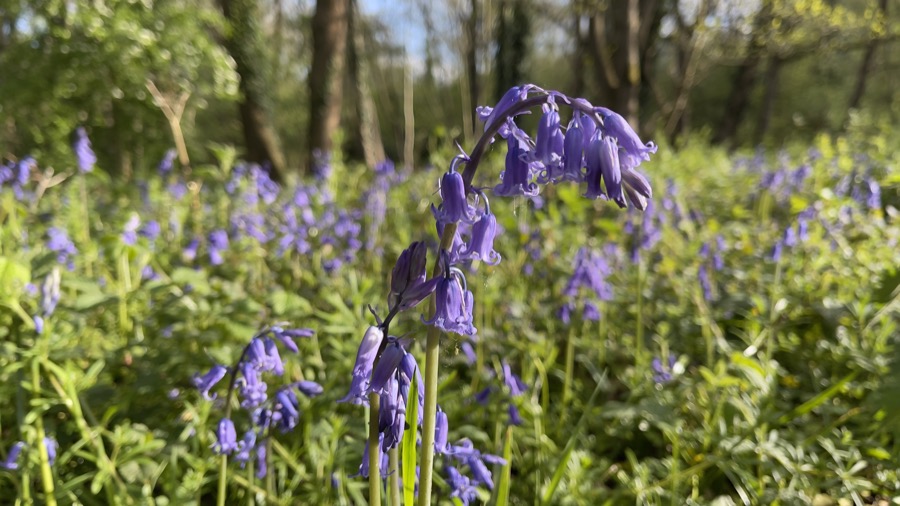 We're getting there, and again this is a decent enough photo (looking back, I've no idea why I went for 16:9 here - 4:3 would have worked better), but I wanted to go a little further in my imagination.

Coming across, later in the walk, a pile of cut logs in the sun, a metre in front of them and also in the sun was a single illuminated bluebell. Something about the contrast between the blue and the warm orangey-browns of the background struck me and I tried to capture this, firstly using the iPhone's Portrait mode, since I had the luxury of that natural depth of background: 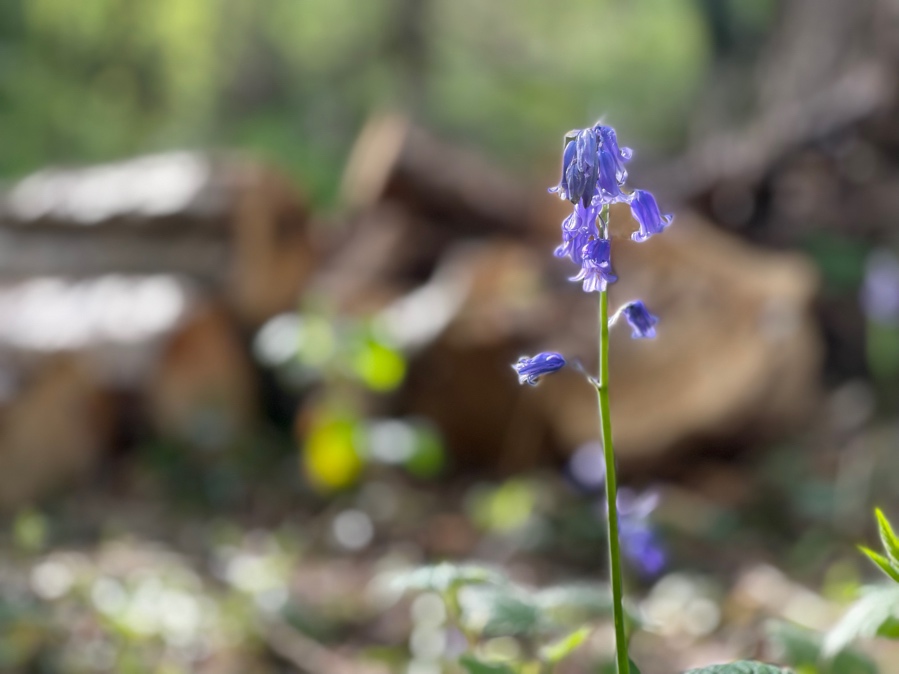 Argh. It's all too much. Yes, the artificial bokeh is there, but it's way over the top for what I had imagined, plus there are edge errors if you look closely. And there's so little of the bluebell in the frame that featuring just those pixels is out of proportion. Why not rely on the same natural shallow depth of field that comes with a large aperture and a close-up subject, as demo-ed as a problem above?

So I tried again - forgetting to toggle ProRAW back on after it had been disabled by using Portrait mode, but in this case the iPhone's natural processing algorithms do a good enough job if you don't pixel-peep:

I really like this shot, with the bluebell just off centre and the logs filling the rest of the left of frame, artily - and optically - blurred, and with the colours all nicely contrasting with the intense blue of the flowers.

Again, you can find the full resolution (HEIC format) photo on OneDrive if you want to view it, analyse it, or simply use it, perhaps as a desktop background. (If you post it publicly, then an attribution and link would be appreciated.)

Thanks for reading, these photo walk 'stream of consciousness' articles do seem quite popular. Hopefully I've inspired you to head out and snap away for yourself, indeed the very act of analysing my own shots help improve my own abilities, I've found.