Almost all mobile operating system implementations have some form of 'night shift' baked in these days - an optional 'yellowing' (actually less blue, but you get the idea) of the interface to help reduce eye strain in the evening in dimmer light. I'm a big fan, though there's an extra question which an American study has tried to answer - does the use of 'night shift' visual effects help you sleep once you put the phone down? See below for some quotes plus comments - the studied question didn't really pan out, but everyone agrees that there are still significant benefits.

The study itself is here, and here's its titular question:

Does iPhone night shift mitigate negative effects of smartphone use on sleep outcomes in emerging adults?

And, in more detail, from the summary:

I should note that there's no significance in the use of iPhones here - Android users should have produced similar results. This being cross-posted on AAWP, I should note that there's no OS-level way to implement a 'night shift' (or 'yellow shift', or whatever) mode, since the rise in popularity of this mode post-dated serious development of Windows Phone or Windows 10 Mobile, but there are a number of third party 'reading' applications which include an eye-friendly night mode, so the topic isn't completely irrelevant.

Turning night shift/light modes on, on a Samsung Galaxy flagship and an iPhone. Your phone's UI may vary!

As per the 'results' above, there wasn't really a dramatic conclusion, other than detailed analysis stating that 'the no phone condition demonstrating the best sleep outcomes'. But the whole issue is fairly complex and there are other huge variables, including what apps were used (e.g. sleeping reading or adrenaline-boosting games) and other personal preferences. Luckily, referencing a major name in the Windows world, WC's editor Daniel Rubino, was a 'polysomnographic technologist' (one who runs sleep studies) in a previous career and so I was interested in his take on the study:

Of course, this raises the question: Is (Windows 10's) Night light feature just a gimmick? I'd argue no, or rather, it's best to understand what it is good at.

The number one reason I use Night light is not to help me sleep better, but for eye comfort. That yellowing of the screen reduces the intensity of white backgrounds, which is easier on my eyes and helps reduce eye fatigue. It is similar to the Immersive Reader in Microsoft Edge, dark mode in apps, or using blue-filtering glasses like Razer Anzus. It is also why many hardcore readers prefer an Amazon Kindle with its E Ink technology, which more closely represents paper than an LCD. Turns out, staring into what is basically a light bulb is exhausting.

The study in Sleep Health, though, does strongly suggest it is not blue light filtering that matters, but the content you are consuming. BYU psychology professor Chad Jensen, who led the study, remarks:

While there is a lot of evidence suggesting that blue light increases alertness and makes it more difficult to fall asleep, it is important to think about what portion of that stimulation is light emission versus other cognitive and psychological stimulations.

Jensen means that if you are on your laptop, lying in bed, reading political commentary, or debating people on Facebook, your brain will be emotionally stimulated, which is much more likely to impact sleep onset and overall quality. Putting a blue light filter on will not overcome that.

Use Windows 10 Night light to work harder, not sleep better.

A shorter version is there is no magical pill to getting better sleep. It comes down to habit, lifestyle, and mitigating external factors like too much caffeine or not enough exercise. Gawking at your yellowed laptop or phone, doom-scrolling on Twitter, or playing video games, while lying in bed for an hour won't cut it.

Indeed. I have some experience of all this in guiding other family members and friends in the mobile world and in wider life (notably, my father developed cataracts as a result from being out in the sun too much over many years). The human eye can gather accurate scenes with amazingly low levels of light - and, in theory, it can handle over-bright light by 'stopping down' by reducing the size of the iris. The problem in low light and at night is that the auto-brightness routines in both iOS and Android often don't bring screen light levels down far enough. So you get a bright (often white) display in a sea of black and the eye has to compromise, with resulting eye strain.

There's nothing innately wrong, if you wake and can't get straight back to sleep, with checking your phone quickly (e.g. for important messages or updates) for a few minutes, subject to the points below - the activity may make your sleepy eyes tired again and youll drop off faster.

But I would suggest, from late evening onwards, for your best eye health:

Sound about right? You won't necessarily sleep better, as per the question above, but your eyes will be strained less. 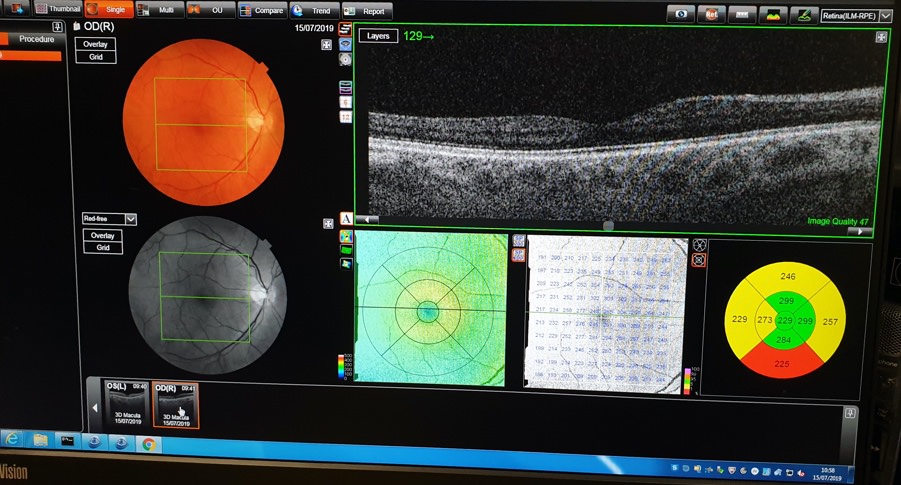 This is my right eye! The wonderful NHS do regular tests and I love the sophistication here, in reporting to me that my eye(s) is/are in good health still. Phew!

I should mention that I'm not a medical professional (obviously), so take all this with a pinch of salt. But I have had my eyes checked every couple of years for two decades of smartphone use and my retinas are seemingly still perfect, so hopefully my experience here is relevant?