Cortana isn't dead (yet)! Here's what you can still do...

Cortana, Microsoft's voice assistant, was always a latecomer to the party, following Siri and whatever Google were calling their voice tech at the time, but it was right up there in terms of functionality in 2015. However, with the withdrawal from 'mobile' and with the ending of support for Windows 10 Mobile in January 2020, what Cortana can actually do has gone downhill, with many people, including me, concluding that the assistant was dead and useless. That's not... quite... true, since there are numerous voice queries that still produce sensible results. With quite a few caveats, as you might expect!

The main/core functionality that has been lost, of course, is anything to do with you, your information, your day, your 'notebook', your email, your alarms and reminders, and so on. Which, arguably, is more than half the point of a voice assistant. But I still thought it was worth cataloguing some of the voice queries which still work and may prove useful if, say, you have dirty or busy hands, and don't want to touch your Windows 10 Mobile phone...

I think you'll be surprised, even if the likelihood of you still using Windows 10 Mobile in late 2021 is now remote. So file this all under 'interesting' and raise a virtual glass to Cortana's senior years. 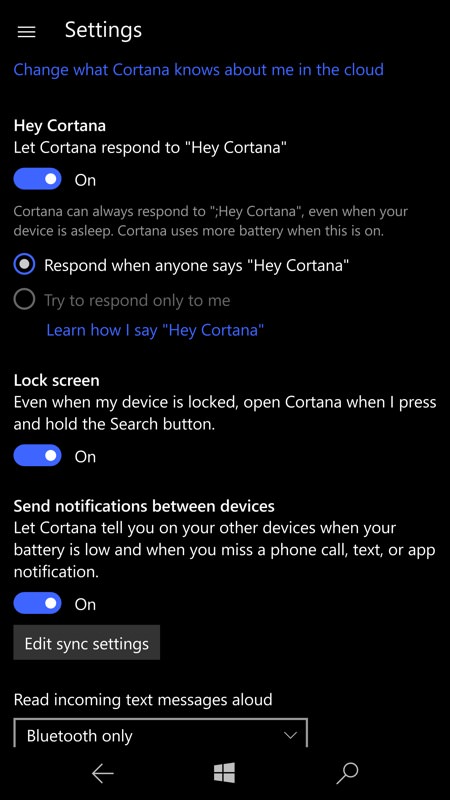 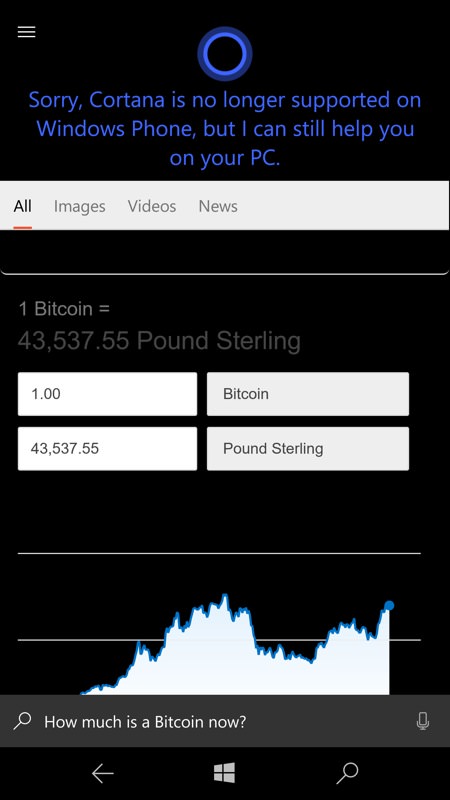 Although you can long press the Search icon to get Cortana up, 'Hey Cortana' by voice also still works, but do enable this in Cortana's Settings; (right) here's a common query (in my life, anyway!) - answered perfectly, but you do have to put up with the warning note at the top. Still, info, data, charts, all popped up in seconds. 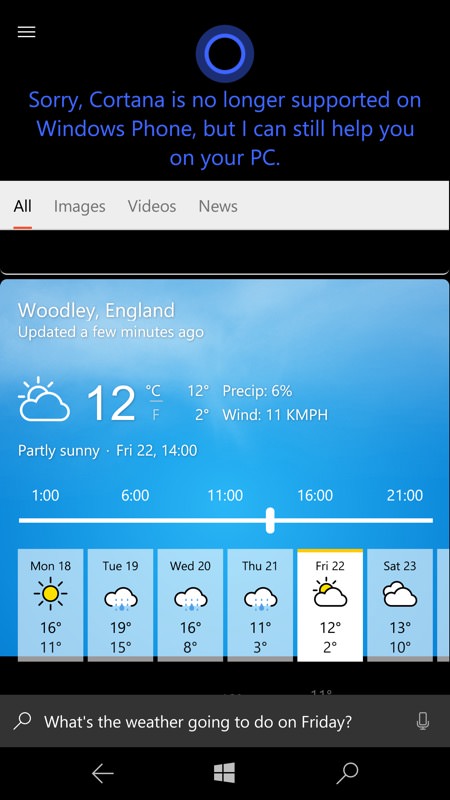 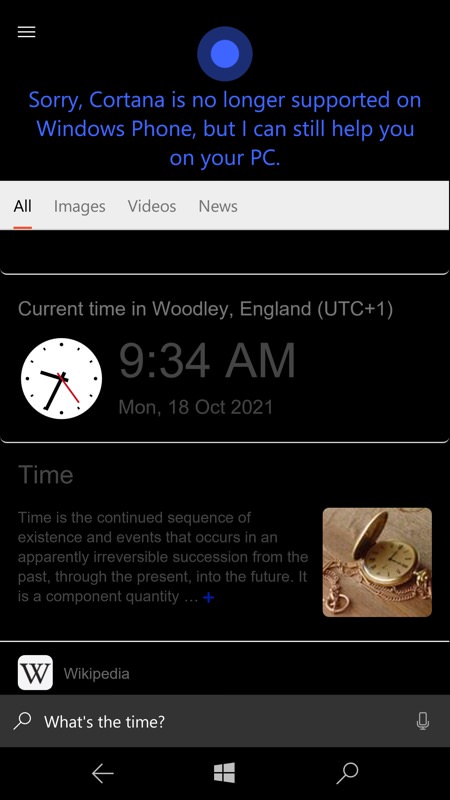 Weather queries are among the most common to digital assistants - and this, thankfully, still works fine, bringing up detailed forecasts from Microsoft's MSN; ditto something else common - getting an accurate time fix. It's worth noting that the presentation is very much NOT optimised for, or tested on, Windows 10 Mobile. So in dark theme mode here, the query is shown clearly but the results are grey on black, which isn't very clear! 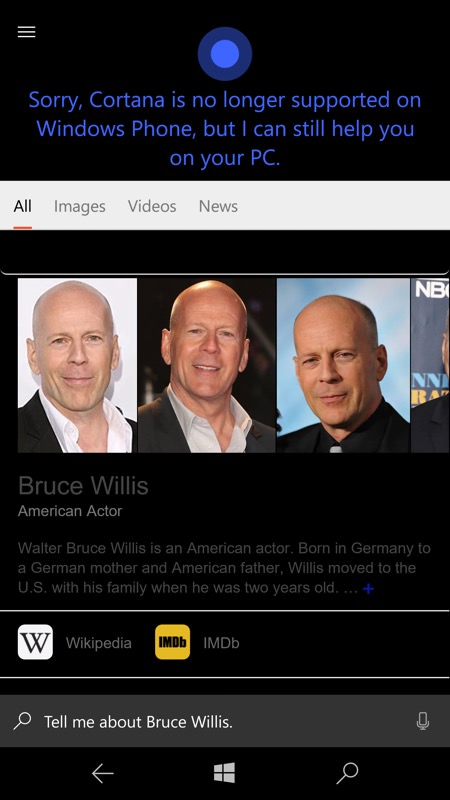 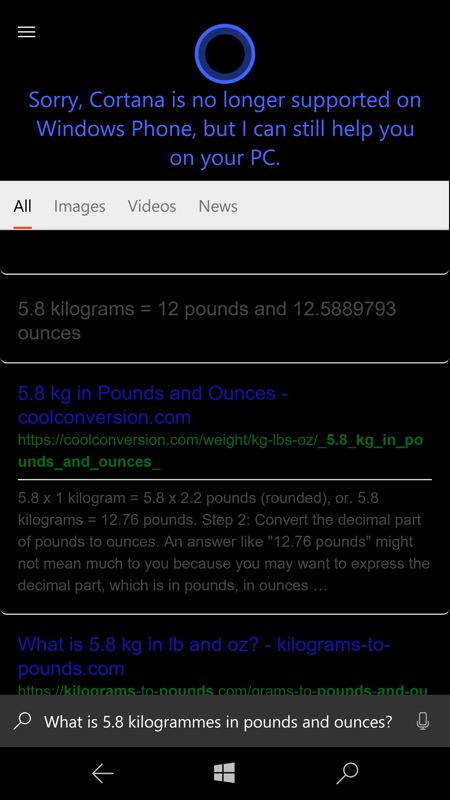 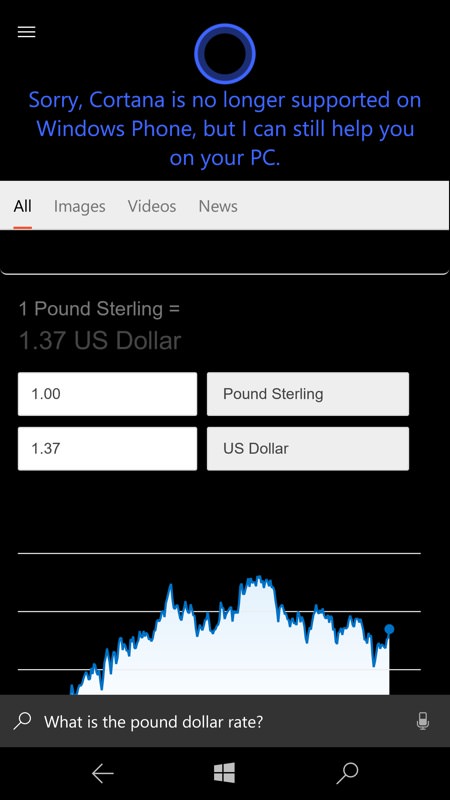 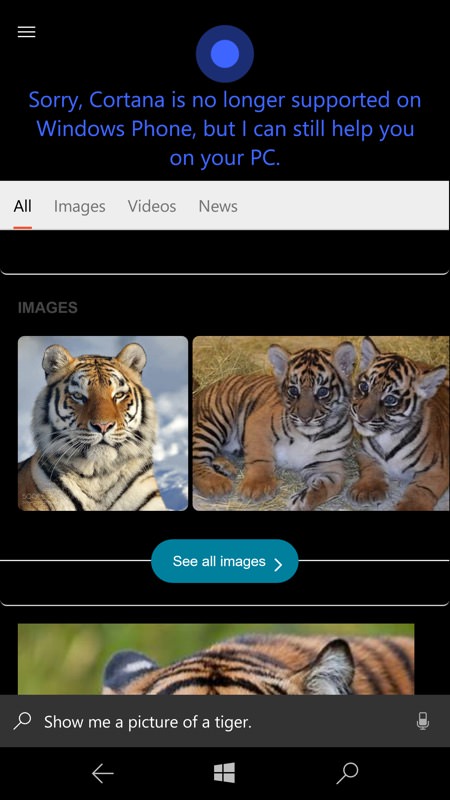 Ditto for asking the value of currencies, another very common assistant question; (right) and image search too - although you know what a tiger looks like, image searches can be more useful for birds, insects, and flowers!

What's that? Launch an app? Translate a phrase? Oh yes... 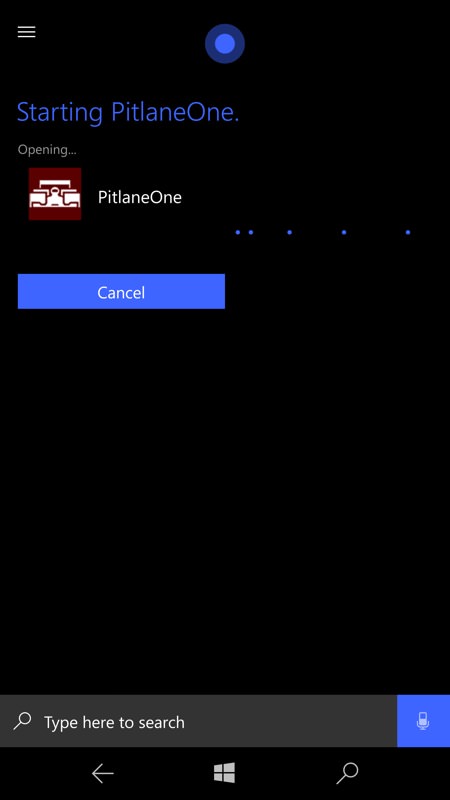 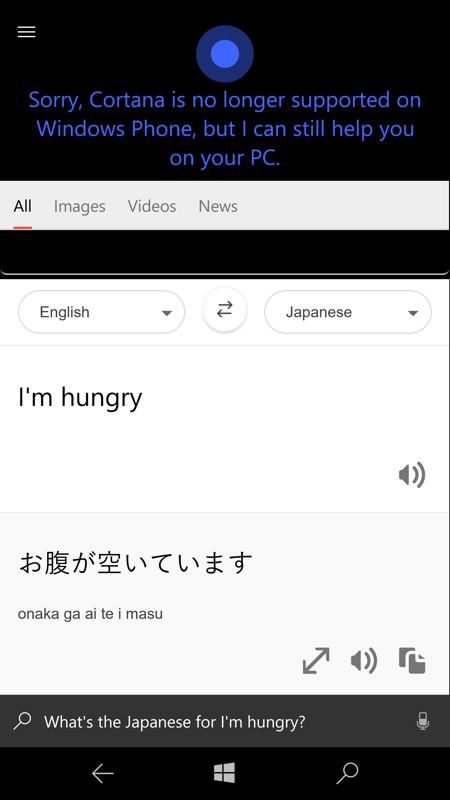 This is where I started to get pleasantly surprised and to start writing this feature. You can still ask Cortana to open an app, hands-free, even a third party app with an odd name, as here. PitlaneOne is a Formula 1 information application, recently featured here; (right) translation of phrases from one language to another is still 'magic' in my eyes, and still possible here in Cortana, amazingly, complete with audio playback (on tapping the loudspeaker icons)! 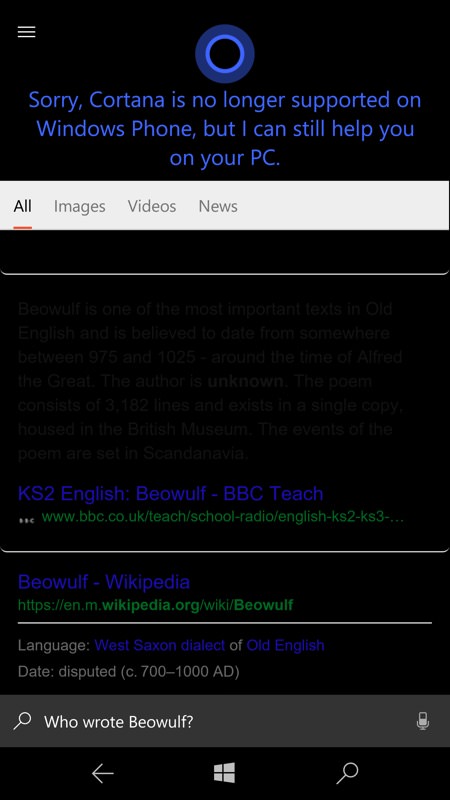 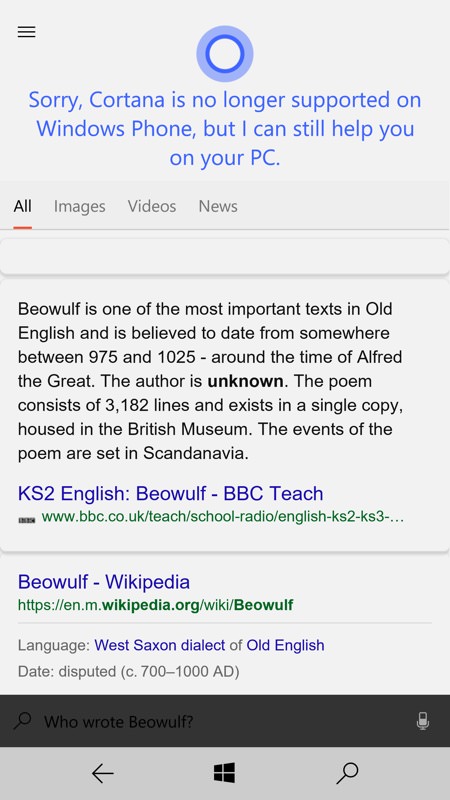 Asking Cortana for information on Beowulf, the answer is in such dark grey that it's invisible! Let's try (right) switching my Lumia's theme from 'dark' to 'light'. Hmm.... I can now see the answer, but the query itself (at the bottom) is now similarly hard to see. Argh! 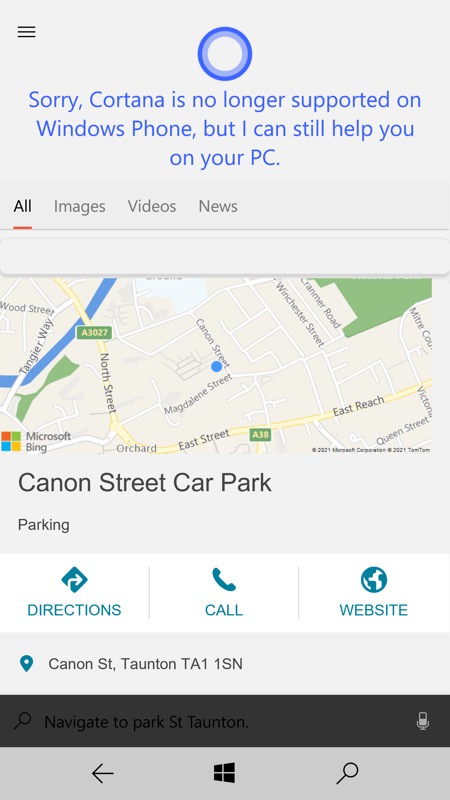 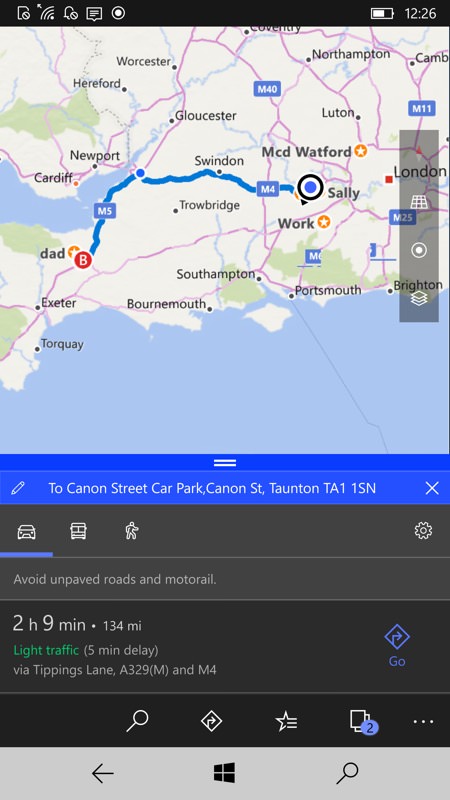 Although you're unlikely to still be using a Lumia on the road these days, Windows 10 Mobile Maps still does a pretty good job, even including live traffic. And all driven by voice, e.g. "Navigate to Canon Street Car Park in Taunton" etc. Which is impressive, two years after support for the OS was pulled. Just note that map updates stopped earlier this year, so some new roads will be missing!

Controlling the phone... and getting lyric help... 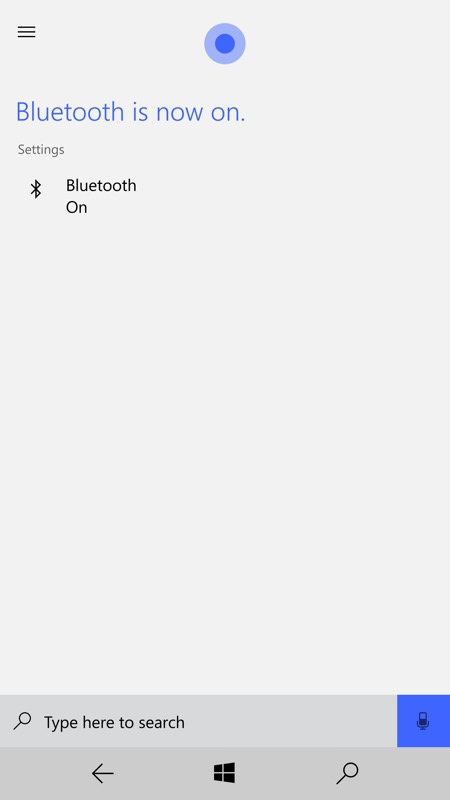 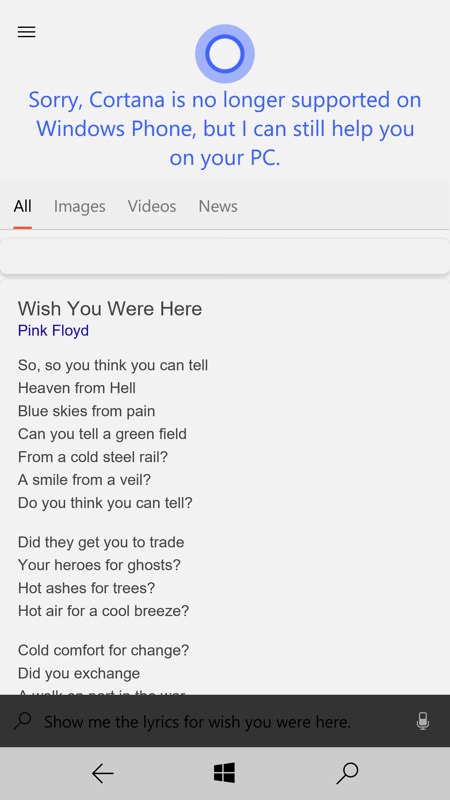 "Hey Cortana, Turn Bluetooth On" still works a treat, too, so add that to the 'working' roster; (right) One of the original queries from my 2015 testing, "Show me the lyrics for 'Wish you were here'" brings them up a treat. Shame that the query itself is almost invisible!

Obviously, if this was a new digital assistant, this would all lead to an appalling rating - the warning messages, the inability to cope with light and dark themes, the lack of access to personal information, it all adds up.

On the other hand, I'd thought that Cortana was dead and unable to do anything other than a simple web search, but that's clearly too pessimistic. There's still quite a bit you can with your voice, including recognising text input generally into various apps. And with Cortana, either with voice or by typing queries.

So it's perhaps not a 'smart' digital assistant anymore - I think we have to drop the adjective. But as the screens above attest, Cortana is still hanging in there by the skin of its teeth.