Yes, yes, it's a confusing situation. I blame Apple, for taking away the 3.5mm headphone jack from their flagships (to boost sales of their new AirPods) and then I blame other companies for copying Apple. Happily, most phones under about £400 still come with jacks, but for anyone wanting an Android flagship for the last two years and who isn't all-in on Bluetooth, some way of getting wired audio out of a Type C jack is worth researching. Online, you can get 'adapters' from £1 to £100, which means that you might like some guidance from AAWP. Here, I test two candidates and am blown away by one in particular!

The 'confusing' element comes in that many Chinese phone manufacturers have a DAC (i.e. digital music to analogue audio) inside the phone and output music through unused pins (SBU1/SBU2, plus voltages on D+ and D-), meaning that a 'dumb' adapter for £1 on eBay that literally passes through connections to a 3.5mm socket and with no active circuits, will work. This is OK if you have such a phone but it's worth noting that this approach to audio in a Type C world isn't recommended (by the industry). And if you plug such a dumb adapter into a Google Pixel or Samsung or Nokia (etc) flagship phone then nothing will happen.

Digitally cleaner, more standard, and with higher audio quality and lower noise, is for digital audio streams to leave the Type C jack via USB 2/3 data pins and then a DAC in an accessory (or headphones themselves) can do the conversion to analogue away from the electronic noise of the phone's chipset. I've talked about this before in my 3.5mm/DAC round-up on AAWP (which I won't link to yet, since it's currently under deep revision) but for most of us venturing into an Android flagship world it's worth researching the various true DAC/dongles. Again, I'll link to my round-up when done.

Why 'DAC/dongle' as a term? Its clumsy, but 'dongle' on its own is misleading because it can look identical, whether dumb or with a DAC. The easiest way to tell up front is to look at the price. Dongles with DACs in (as here) are around the £10 mark at minimum, since they contain plenty of advanced circuitry. And often veer through £20 upwards, with £100 or more for really serious (and bulky) kit. Whereas the dumb analogue dongles are dirt cheap and much less than £10. That's how you tell, short of them having them in your hand! 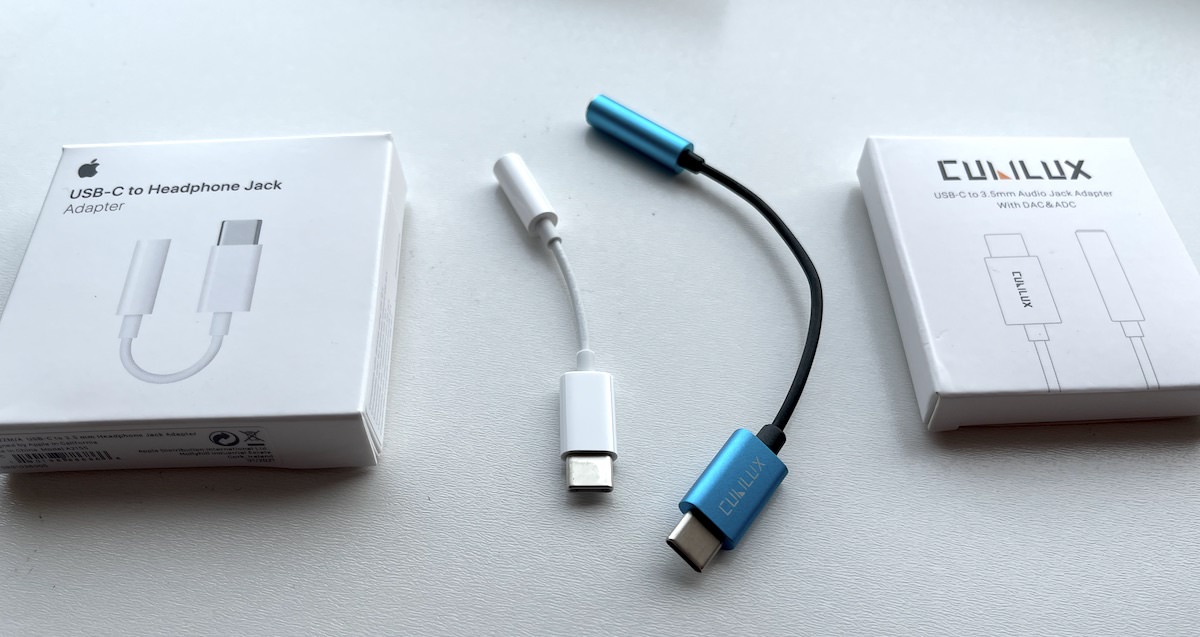 In advance of my revised round-up, I've bought two new (to me) DAC/dongles in for review:

Given that Apple's main 3.5mm DAC is for its own Lightning-port-equipped iPhones, I was surprised to see that Apple also made a Type C version. I'm guessing for use with certain iPad Pros? Still, the Lightning DAC/dongle is excellent - also £9 and I've bought half a dozen for use with family iPhones. Volume and fidelity are both super - perhaps not true audiophile quality, but easily good enough for most people, including me.

So, surely their Type C to 3.5mm version would have the same amplifier in and perform as well?

Err... no. Not by a country mile. Apple's Type C to 3.5mm DAC is horribly underpowered and uses a totally different amplifier to the Lightning version. Whichever headphones I plugged in, volume was way too low - even at full volume on my test Google Pixel, volume in my ears wasn't high enough. There's just not enough oomph. And, checking other reviews online, this seems to be a common complaint.

The only mitigating factor is that fidelity was good, so if your use case for a Type C to 3.5mm DAC/dongle was to then wire things into an external sound system or speaker, this should work better, with more chance of achieving volume. But do not, repeat do not, get this for headphone use, since you will be disappointed. (Unless it's for your kids, in which case this will certainly prevent them from damaging their ears!)

The Apple adapter is only available in white and is made from plastic, which is fair enough at the price, I think.

Regular readers may know that the HIDIZS Sonata Mk II was my previous favourite DAC/dongle, with exceptional volume and fidelity. Unfortunately, this is now hard to find online, starting my search for an alternative. And I found this, from Cubilux, claiming "with impedance up to 250 ohm, delivers up to 96KHz/24-bit audio". This sounded promising, and indeed the DAC/Dongle delivers. While not quite as loud or impressive as the original HIDIZS gadget, this is easily loud enough with my test Pixel and headphones, ending up listening at about 80% volume on the phone.

Compared to the Pixel 4a 5G's internal DAC (and 3.5mm socket), I'd say that volume and quality were up by 50%, which is a bump worth taking advantage of. You may query why I'm testing all this on an Android phone which already has a 3.5mm jack? The Pixel 4a 5G is unusual in recent Pixel launches, since the 3, 3XL, 4 and 4XL, plus the older 2, all lacked a headphone jack - and with Google's own implementation of Android and reference electronics, a Pixel is always the best test vehicle for compatibility. As I didn't have the jack-less Pixels to hand, I used my 4a 5G!

Impressively, despite the price, the Cubilux adapter is made from aluminium and available in numerous colours and dual-colour combinations. Obviously, I can't vouch for long term robustness of either adapter, but the use of machined metal at this price is reassuring.

Again, watch this space for an updated round-up of all jack/DAC options (that I've tested).