What would a 2021 smartphone look like if you turned all its sustainability dials up to 11? Six years of security updates, five Android OS versions, five year hardware warranty, and with the entire phone coming apart with one screwdriver in minutes, for part replacement? Thankfully, we don't have to guess, since this is the Fairphone 4, which I review below. While it won't win any prizes for performance or value (or even cosmetics), it's miles out in front of the rest of the pack for 'right to repair'. And electronic waste neutral all the way, apparently.

See also: my initial Fairphone 4 image gallery (from which a few of the photos below are taken).

I did a video version of this review, slightly shorter and embedded below, if you'd rather watch than read(!)

Year after year, Fairphone keeps plugging away, going down its own sweet way in the phone world. In a tech world that’s becoming more and more homogenised, with everything only repairable at great cost by its manufacturers, everything so fragile that it has to be cased and cosseted, Fairphone proposes - again - a different approach.

You’ve heard of ‘right to repair’ in the context of Apple, Google, Samsung, and the like?  Well, you buy a Fairphone and you not only have the right to repair it, you can do so at the drop of a hat with zero technical knowledge or special tools. Broken the screen, broken the camera, feel like a new battery? All available online at reasonable cost and you can fit them yourself, in - literally - minutes.

Partly because of this, but also because the Fairphone 4 is built like a tank, with metal frame and grippy rubberised back, you absolutely don’t need a case on this phone. No cossetting, you just bung it in your pocket or bag as-is. 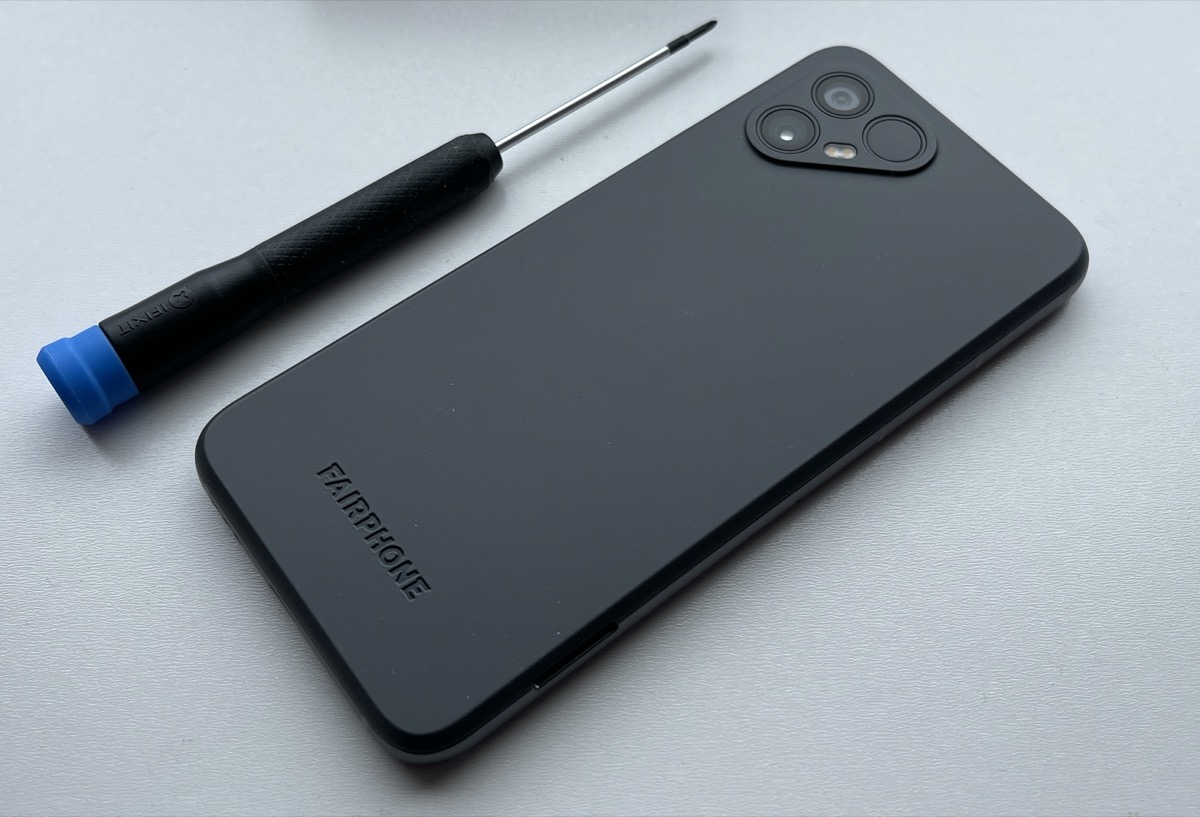 Surely, you’ll say, there must be a catch? Well, not quite a catch, but it’s worth looking at the Fairphone 4’s specifications and value proposition. You see, designing around a fully user-repairable ideal does involve a few compromises. Of which the biggest is that by doing its own thing and being a very small company, Fairphone can’t get top spec core components and the ones it can purchase for its phones, it can’t get at the prices that the big companies can demand from suppliers.

So… you end up paying a lot more for a given spec level. Plus the components have to be, to an extent, packed slightly less optimally, to allow for easy removal and replacement. And all the extra plastic to facilitate this adds weight - the Fairphone 4 isn’t light, at 225g!

That sort of weight in something that's a (2021) 'standard' size feels a little odd at first, but it does add to the sense of general ruggedness - the Fairphone 4 doesn't bend or flex and you can generally have confidence in throwing it around. And, making the point again, if you do smash the screen then it's a three minute (literally) job to replace it yourself. Jaw-droppingly easy, in fact. 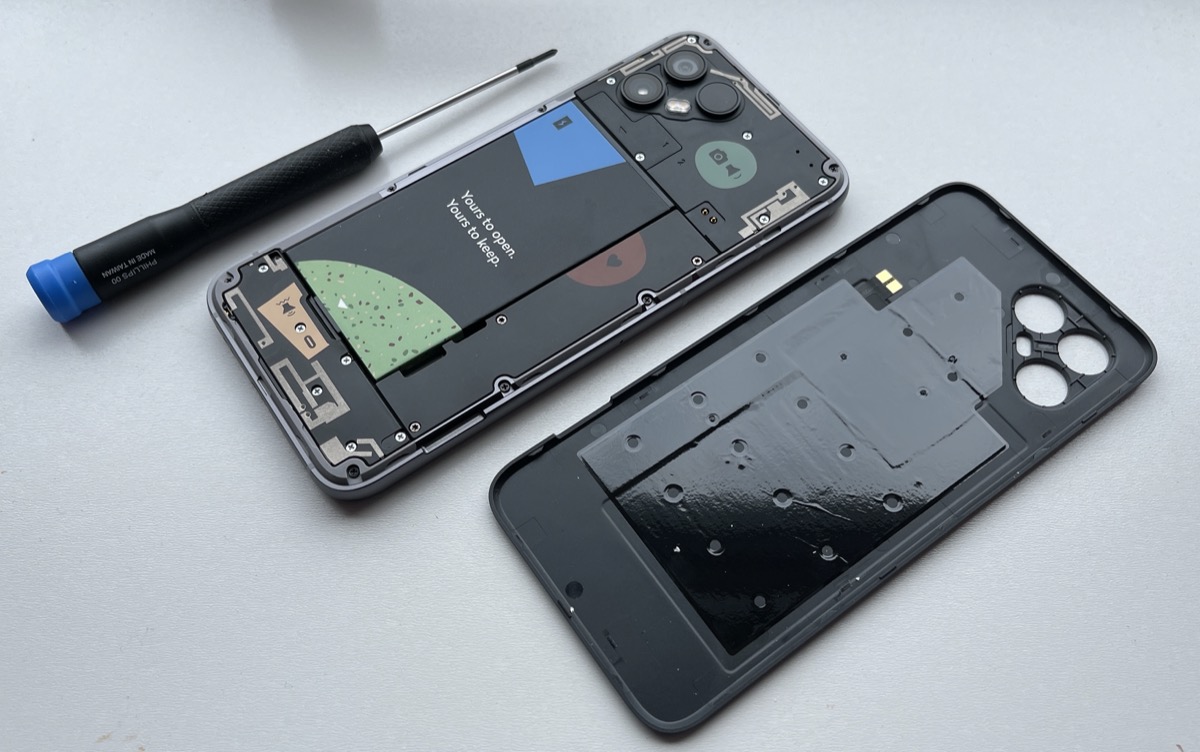 Which is a lot, given the likes of Xiaomi’s pricing, but I have to emphasise again that this is a very different beast. In trying to save the planet, Fairphone not only makes sure that its supply chain and manufacturing process is electronic waste neutral, it not only arranges that the shipping to you is carbon neutral, it encourages you to keep the Fairphone 4 for at least five years, with full warranty for that long.

Yep, you heard that right, a five year hardware warranty. And five years of OS updates are planned, i.e. up to Android 16, though the last two will require Fairphone itself to write the drivers since Qualcomm will have given up on the 750G by then. With, if I read things right, a guaranteed six years of security updates - the Fairphones are THE longest supported smartphones in the Android world bar none.

Like I say, a very different animal to a budget Xiaomi, super though these may be.

Fairphone’s design for the 4 is on the whole a big step up from last year’s 3+, with larger 6.3” screen, though still 1080p and still IPS LCD, which is a little disappointing given the price, but then OLED displays do dim and burn in over time, so maybe LCD is the eco choice? It’s covered with Gorilla Glass 5.

You also get stereo speakers for the first time on a Fairphone, but they’re very… middle heavy. Clarity, bass and ultimately volume are way behind many other phones nowadays, even those that are half the price. 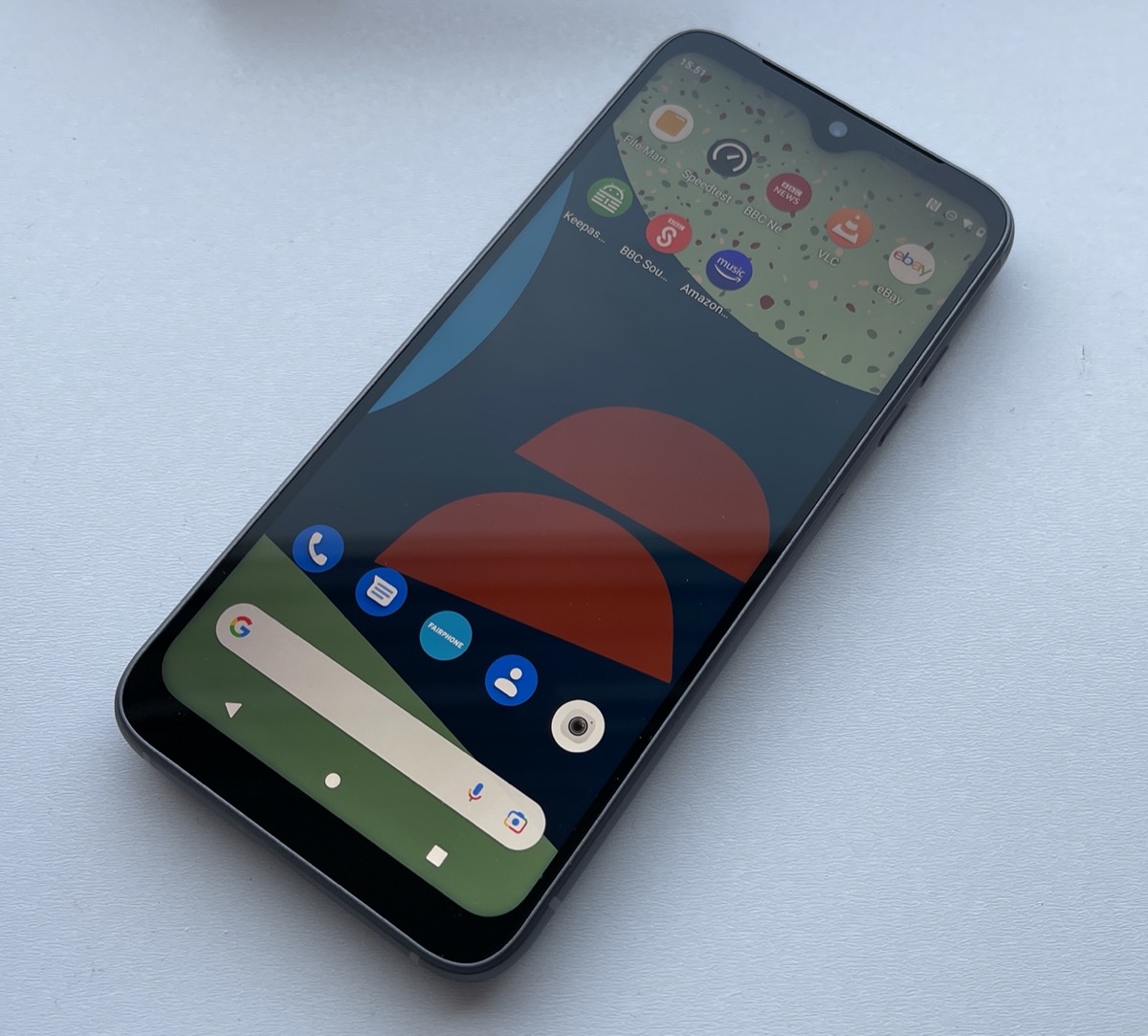 The 48MP Quad Bayer camera’s faster too, at f/1.6 aperture, and there’s now a 48MP ultra-wide too, plus a time of flight depth sensor for portrait shots. Below are some example photos, which are decent enough in all light levels, without expecting iPhone or Pixel levels of imaging intelligence. But then an imaging enthusiast wouldn't buy a Fairphone, I suspect - what is here is easily good enough for the target market and general phone user.

(Though it’s worth noting that several of the Google Camera ports do work here, thanks to the standard Snapdragon chip, so that’s another good imaging option.)

Some sunny examples from the main camera - very decent results indeed. You just to have a little patience (and the occasional manual tap to focus) with the current Camera software...

Getting even closer to things, in shadow and indoors in low light. Again, results are pretty good, with tap to focus definitely needed, but then the subjects are decidedly irregular and tricky...

Tricky lighting - gloomy and overcast, then indoors in a dark church and with masses of intricate detail, then a pub low light display... See what you think of the full photos - there are definitely artefacts, but acceptable for the most part, plus Fairphone is still fiddling with the algorithms...

And then night time. A pitch dark street, a 2x software-zoomed snap, and a typical low light landscape...

Do watch out for the shooting modes, since they get remembered from session to session. So you use something niche like ‘Fireworks’ mode and then forget about it. Until the next week when you’ve just shot a dozen snaps of your baby nephew and you only notice later on that all of these were in Fireworks mode and that there are noise and artefacts. Fairphone could do with making settings memory an optional feature, I think.

There’s currently a little shutter lag, plus occasional auto-focus issues, but Fairphone was at pains to point out that the Camera software is still being actively developed and that a big update was imminent, later in November. So I'm cutting their software team a little slack, the phone isn't really out in retail in any numbers.

The Snapdragon 750G chipset here is clocked at 2.21GHz and performance is... adequate. Running Geekbench 5, the Fairphone 4 scored the same across the board as my 3.5 year old Samsung Galaxy S9+, though that was, admittedly, a flagship in its day. In real world use, the interface hesitates here and there, but unless you were a geek then you honestly wouldn't notice, not least because you couldn't compare it to other, higher-powered devices. But the Fairphone 4 doesn't aim to be a speed master or gaming champion, so again, performance isn't an issue.

The capacitive fingerprint sensor is much faster than last year’s and is now in the side mounted power button, which I like. Way faster than under-screen sensors, as I’ve mentioned many times, though the effect is slightly spoiled by the sensor not waking the phone in the first place. On the Fairphone 4, with current software, you have to press in the power button first, then lift your thumb momentarily, then touch it to the sensor again. I can only think this can be fixed in software because it’s blinking annoying.

The battery’s 25% larger at almost 4000mAh, and I had no issues in the testing period, often lasting two days on a charge, helped by there being no always on display and by the so-so speakers meaning that I didn’t waste battery bingeing YouTube or Netflix!

Fast charging in the eco-conscious Fairphone world is 20W, Quick Charge 4 and Power Delivery-compatible, and this is absolutely the sweet spot. Charge any faster and you’re generating heat, wasting energy, and reducing the longevity of the battery.

Though - and I have to emphasise this again - the battery can be swapped out in about 15 seconds, still a lovely concept in 2021! New batteries are £26 on the Fairphone web site, which sounds about right, and if I was using this as my main smartphone - and that’s a big if - then I’d go old-school and have a fully charged spare sitting in my pocket, ready to slam in, when on a trip. (Ah yes, trips. Remember those, pre-Covid-19?!) 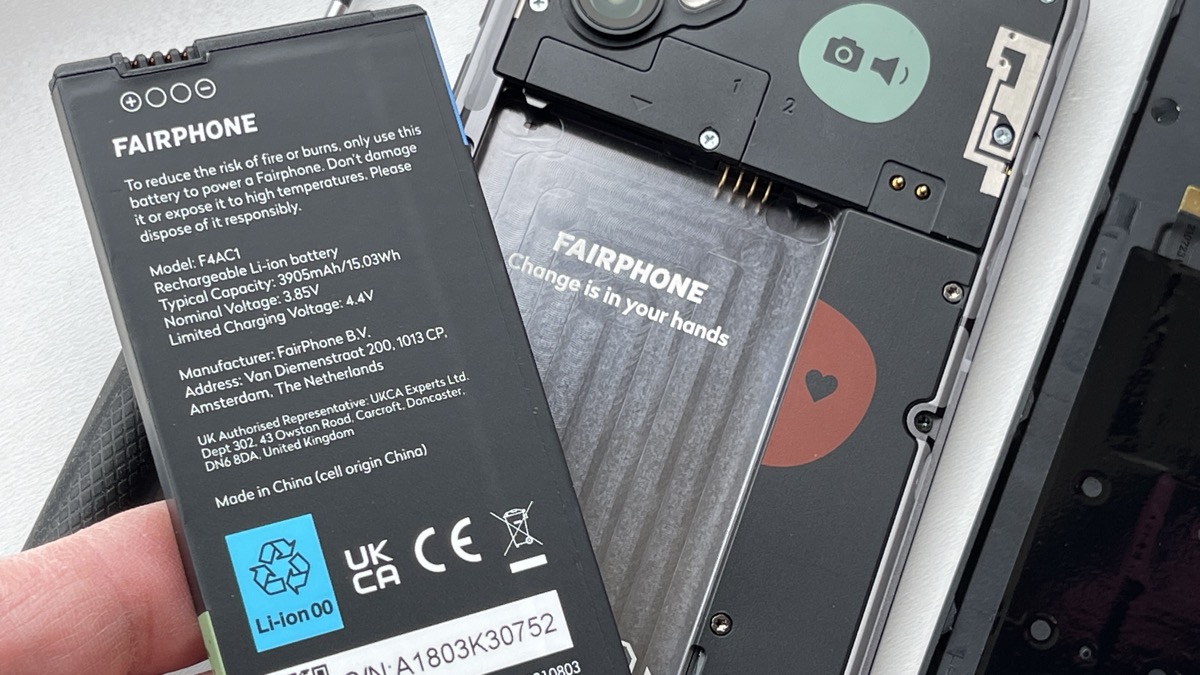 Aside from the high-ish price, there’s one little gotcha and it’s a bit unfortunate. Fairphone has ditched the 3.5mm audio jack, claiming that doing so made it possible to make the phone IP54 dust and water resistant, itself an achievement for something with a peel off plastic back. I don’t really buy into Faiphone’s argument here, though - Samsung had audio jacks in waterproof phones for years (Galaxy S5/S6/S7/S8/S9/S10 ranges, plus many others lower down).

In fairness, most of us are learning to live with Bluetooth 5.1, which is now terrific in my experience. And when you absolutely need to go wired, Fairphone’s own Type C to 3.5mm dongle is only £9 - though I’ll bet you already have one, which will also work.

The software, as with previous Fairphones, is stock Android 11 with all the Google apps and services you need and without any bloatware. Hoorah.

You take it, add your own favourites, and then you have your usual gesture-based Android environment (not on by default, you get the 'three buttons' interface, but it's a trivial toggle in Settings). Including Google Assistant, the Google News feed off to the left of the main homescreen, the works. No complaints here. Think of this as a Pixel that you can take apart!

Google Assistant in action (Hey Google, or swipe up diagonally, the usual mechanisms. Here recognising a song playing in my office.

You do get a Fairphone app, which is fair enough - and there's a really decent user guide built-in, even if it's showing Fairphone 3 content in my pre-retail review unit - an update will sort this out!

With LCD screen, you’ll be expecting not to have an always on display, but there’s also no Lift-to-wake, or even double-tap-to-wake, which seems a bit of an omission. Two features for Fairphone to add in updates, I feel...

In summary, my heart is absolutely with Fairphone and I wish it all the success in the world, it’s the little company trying to change the industry, and who knows how much of an impact it can make.

My cold-light-of-day mind, on the other hand, points out that I can get FAR better display, speakers, camera, battery life, for the same money elsewhere - or similar components in a Motorola or Xiaomi phone at half price… But that’s not the point. Anyone buying the Fairphone 4 is standing up to be counted in a tech world that’s fast becoming rather commoditised and heartless.

And that’s worth applauding. My score of '80' above reflects this - a similar smartphone, as released as a sealed unit with no eco pretensions from, say, Motorola, would be scored at least 10 points lower. But the uniqueness of all the replaceable/repairable parts, the 5 year warranty, the six years of updates, and the sustainability ambitions at every turn, all have to be rewarded somehow, even if you, the 'All About' site reader, eager to see what flagships can do, aren't necessarily the target market. 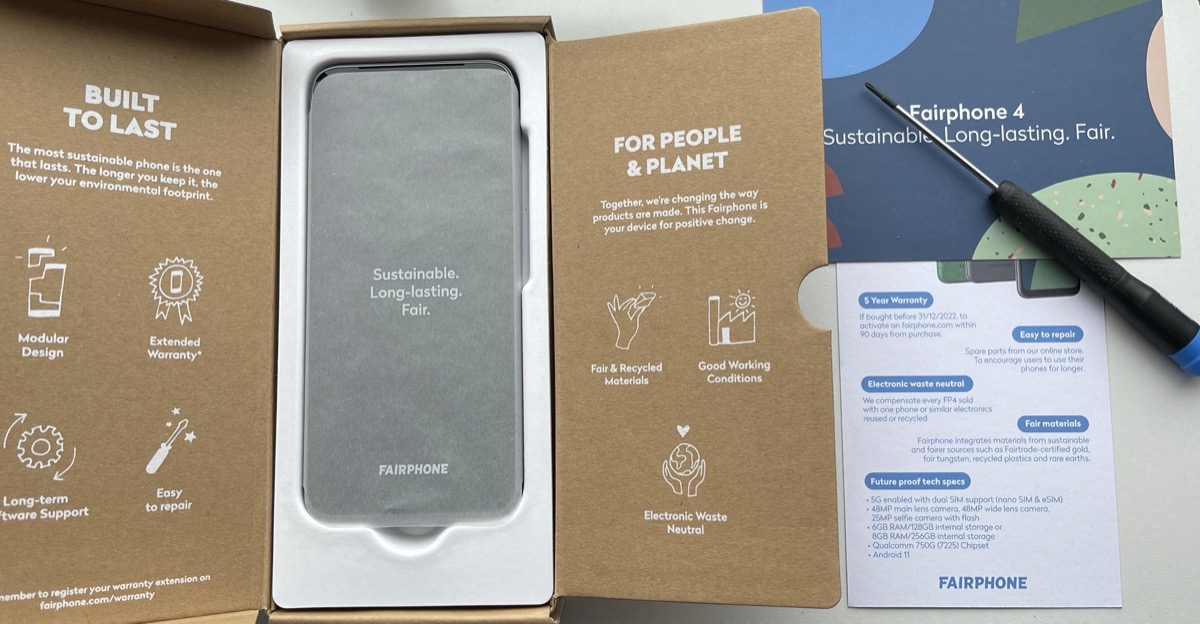