Surface Duo 2 month continues, it seems, with a belt case that almost perfectly fits my own requirements. Hey, it only took a month of searching, but I got there in the end. If you're a fan of belt cases (like me) then this is the one you want, run don't walk, etc. to AliExpress. If you're a confirmed 'pocket' person, pouring scorn over belt case wearers, then a) you're missing out(!), and b) this probably won't be of that much interest!

I suppose I should preface this with my thoughts on carrying smartphones. You see, back when phones were tiny (think 2000-ish), everyone carried them in a pocket. But then the likes of the Nokia Communicators arrived, with 6"+ length and significant thickness, and all of a sudden fitting this in a jeans pocket was likely to get you arrested for a breach of public decency(!) A suit jacket pocket is another option, but I don't wear suits very often. So I gravitated to belt cases, ways of wearing any phone, however large, on my belt, as snugly as possible, and ready for action at a moment's notice with no unsightly bulges in my trousers. On my belt, perhaps, but not in my jeans/pants/whatever you call them in your part of the world.

To this day, I've largely stuck to this formula, despite occasional ridicule. And I'd like to contend that there's a huge disadvantage to putting a touch-screen smartphone in a trouser pocket - it gathers pocket dust like crazy. Seriously. I put my iPhone or Surface Duo 2 in my jeans pocket just one time and it comes out covered in 'pocket lint'. Admittedly, how much of a problem this is might depend on the materials used in your clothes, but the dust is a killer in jeans and really, really annoys me.

So a belt case it is: 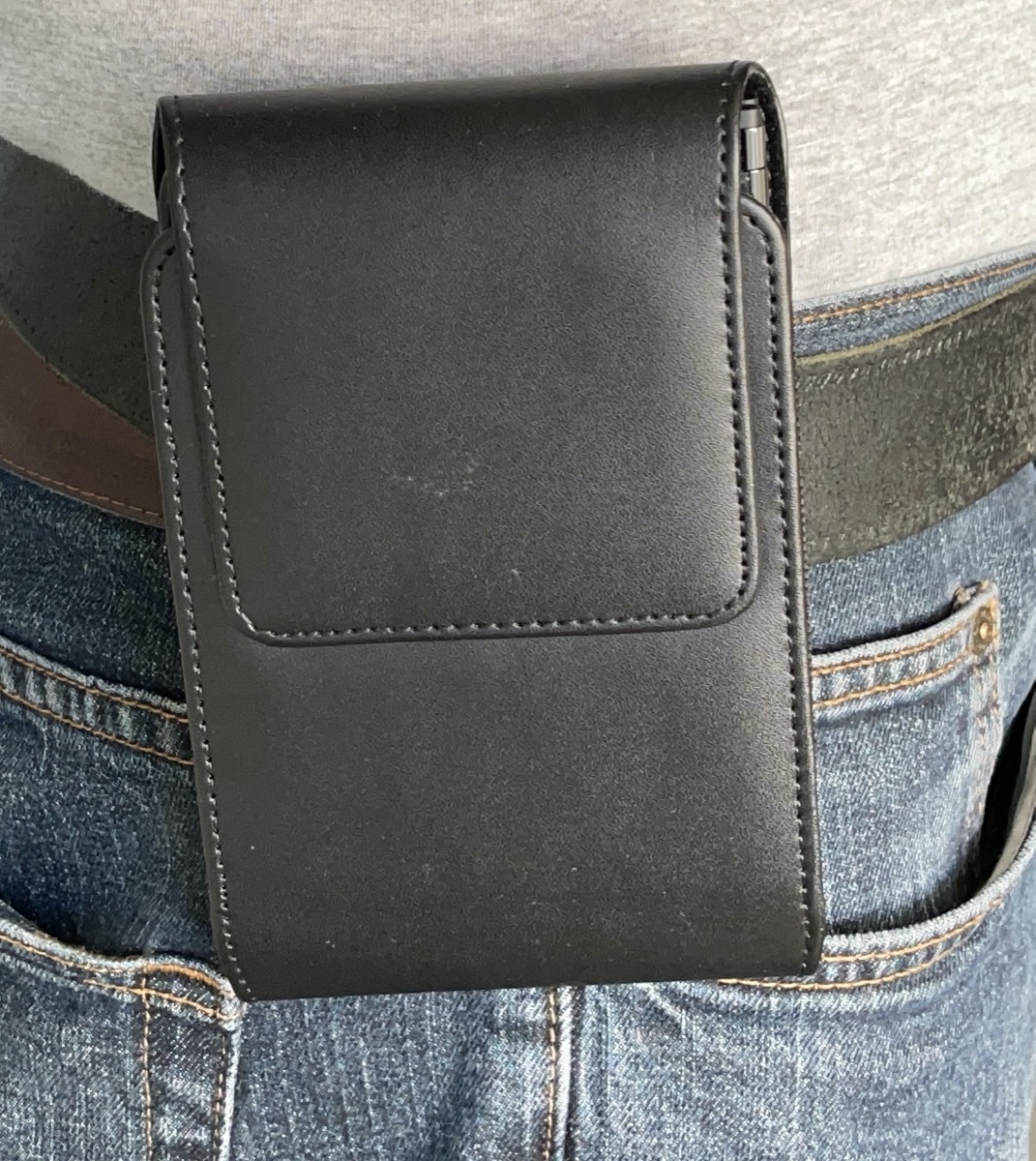 The thing is that the Duo 2 is niche. Very niche, at least at the moment. Plus the biggest supplier of leather belt cases, PDAir, has been out of action (Covid, I think) for over two years, so I had to look elsewhere. And I found the case above, seemingly just about the only purpose-built Duo 2 belt case in the world (though the original Duo fits as well, of course). It's a paltry £6 (less than $10) too, albeit made - obviously - from PU Leather and not the real thing. But it looks and feels decent enough to me. And how the Dickens this can be made out of any material for this price beats me.

The design should be familiar to any belt case aficionado - a continuous, shaped length of leather, backed with velvet on the inside, and reinforced with (probably) stiff cardboard where needed, and a couple of magnets for a secure closure, plus elastic for the sides, meaning that the case would fit other future phones or gadgets of similar size:

It's worth noting at this point that my requirement was for the case to work with the official Microsoft Surface Duo 2 bumpers in place, i.e. when extracted from the belt case, the Duo 2 was grippy and ready for real world action. Happily, the bumpers are so slim and the size margins on the case so large that fitting these inside was a non-issue: 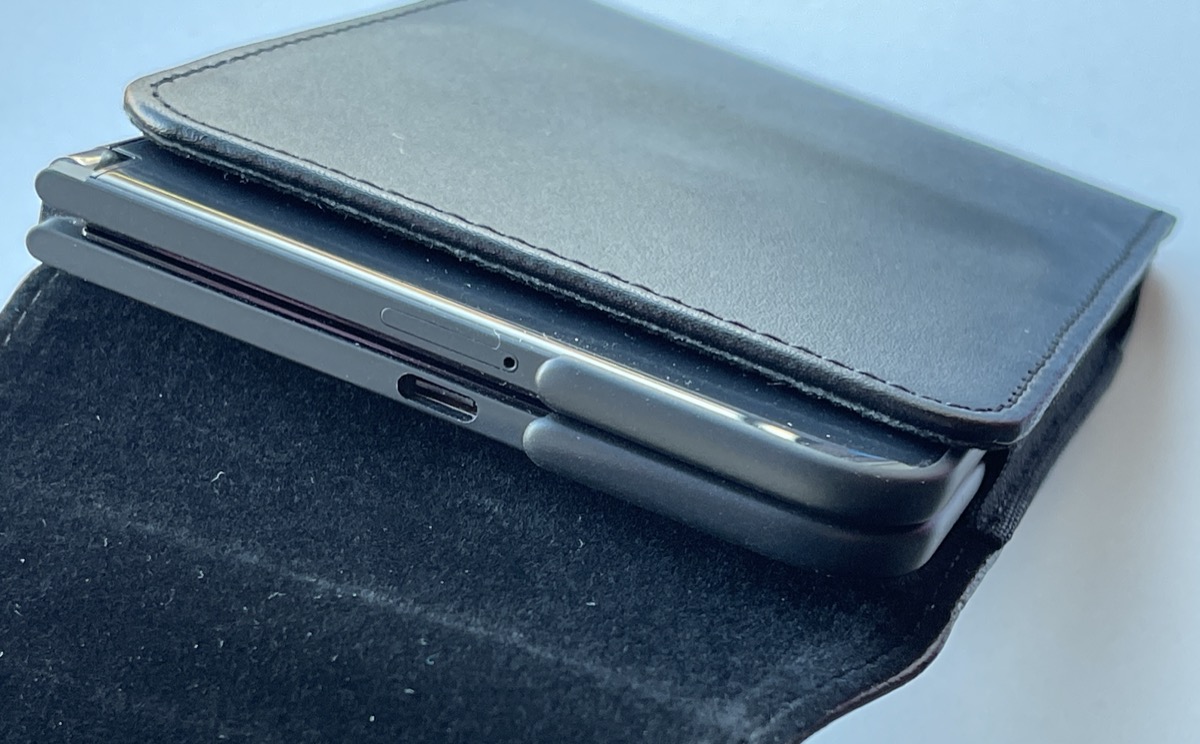 The fold over flap that fastens with magnets is new to me since all my previous PDAir belt cases were open-topped (for quicker access). However, there's extra security that comes with a flap and closure, so I'm happy to trade in some convenience. When I was out in public with an open-topped case, there was always the nagging feeling that a passer by could make a grab for my expensive smartphone and it would be out in a fraction of a second - with a closure, this is far harder, of course. 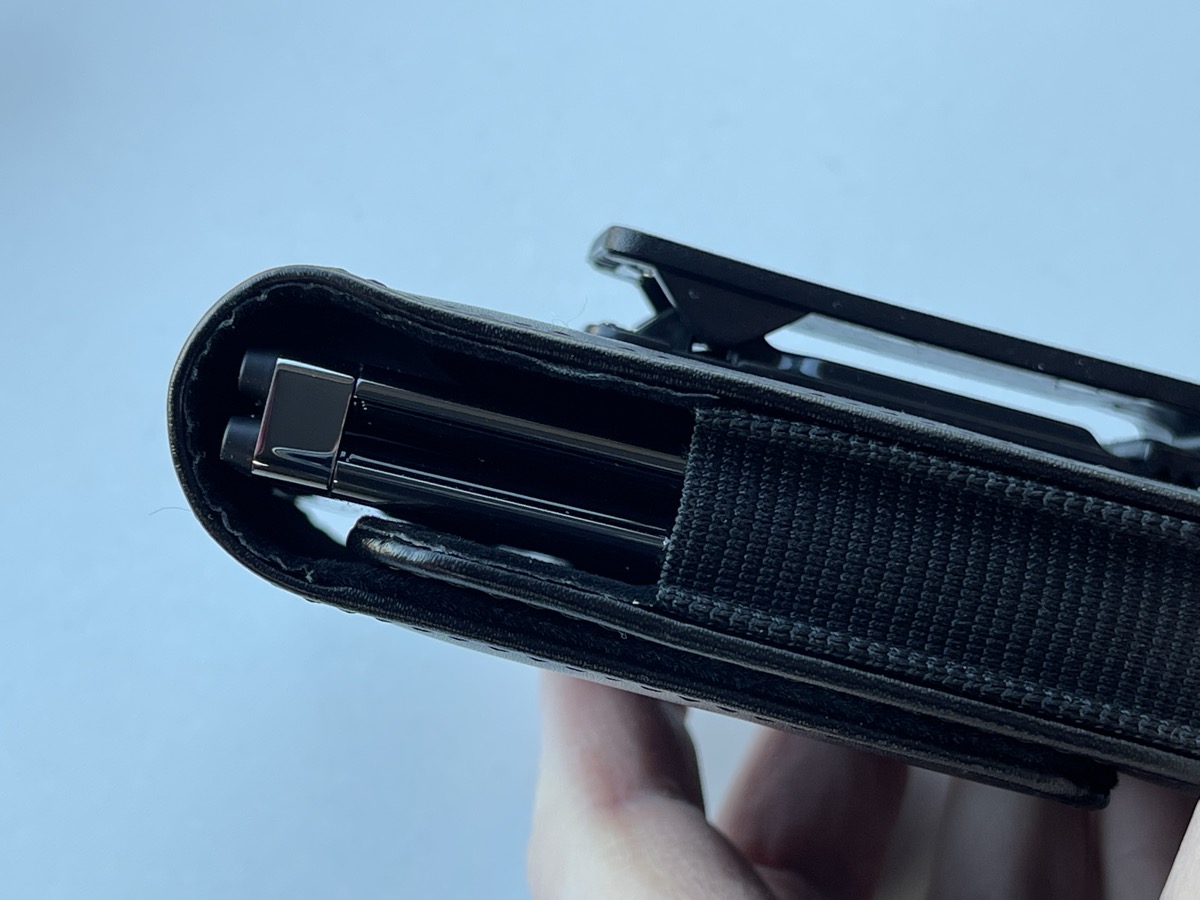 On the back of the PDAir cases is a stitched leather loop, making for a flush fit with the waist, which I've always liked. Here we have a (very) tough and spring-loaded plastic clip on a notched swivel. It's cool in that if the cased phone is knocked then it rotates rather than jars your waist, plus you can manually rotate it when sitting - in a car, for example. The downside is that the notch and swivel add about an extra 0.5cm of depth away from your belt/waist.

On balance, I'd rather have the simple leather loop, I think, but you could argue this either way. And in the case of the design here, it's the only option offered, so beggars can't be choosers! 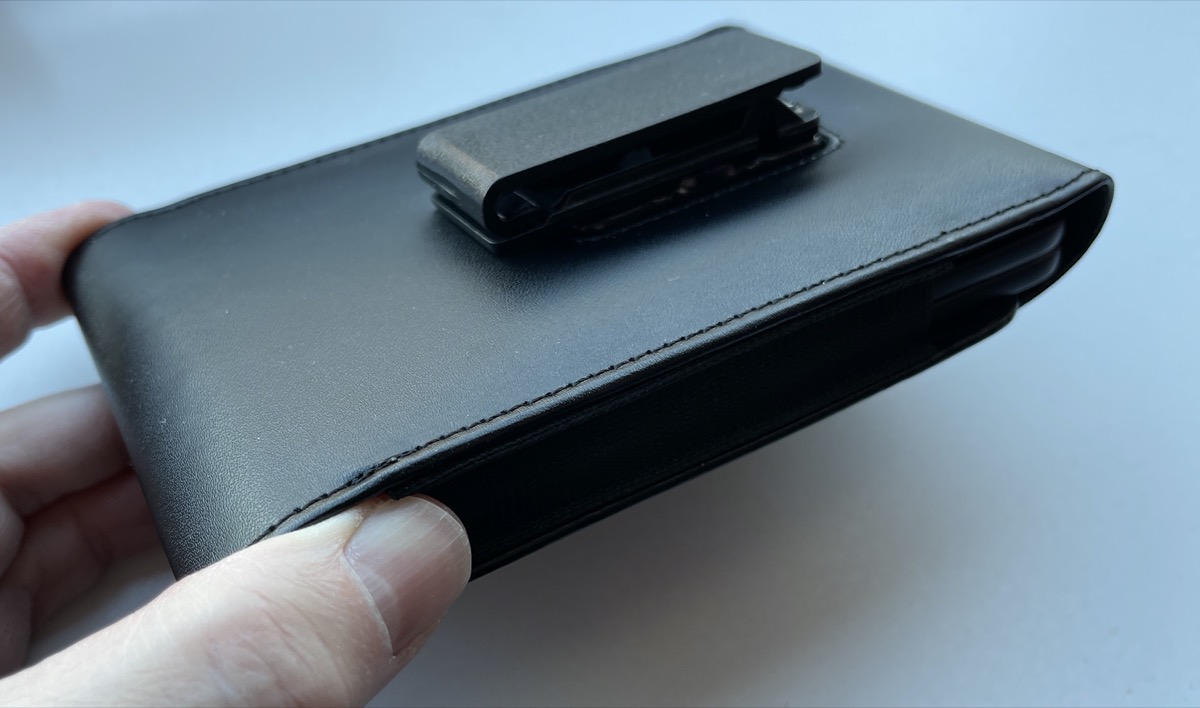 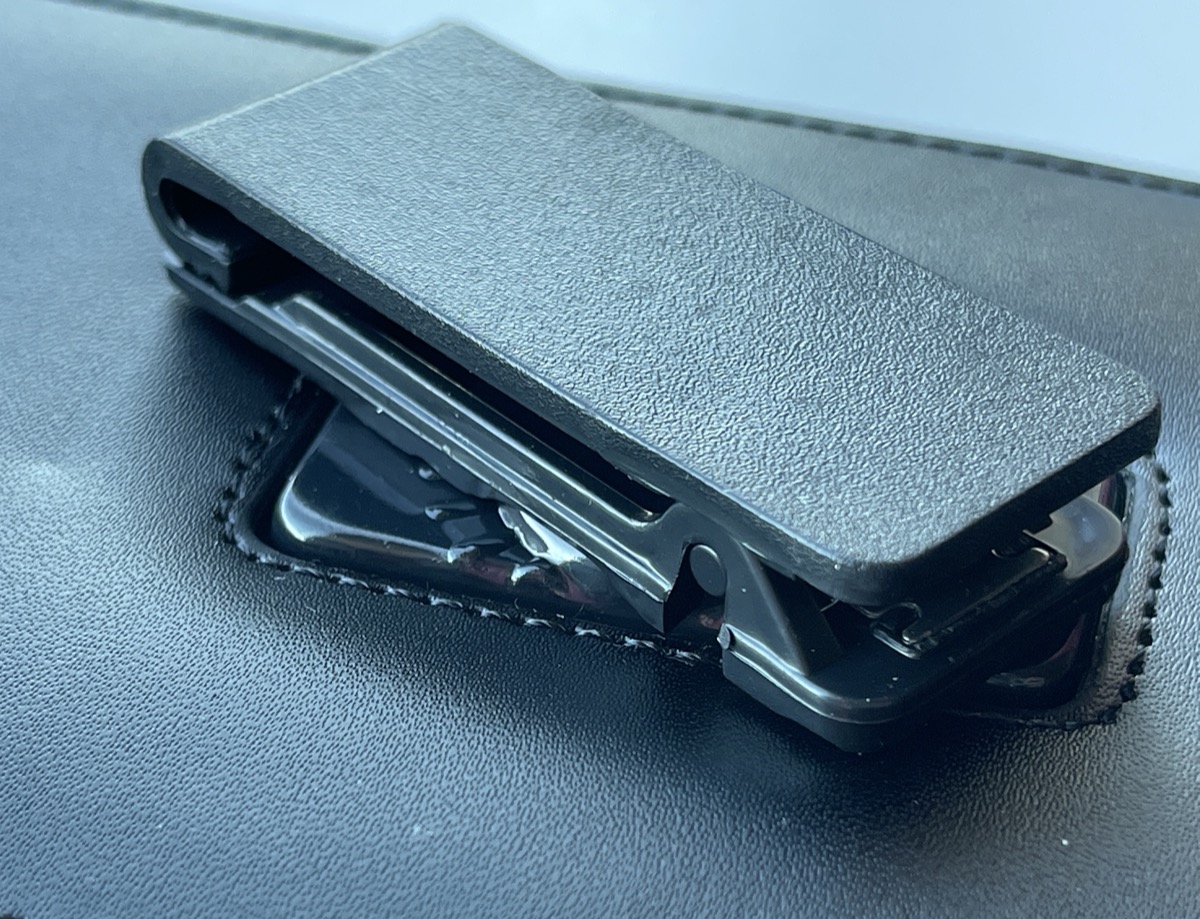 This belt case has no manufacturer logo and all I have for you (other than the buy link) is the seller: 'Qisubao Store'. A typical no-name AliExpress experience, to be honest. Plus I had to wait a full two weeks for delivery from China (which was only just over £1 above the accessory price, which is staggering - this came from the other side of the planet!)

But in the rarefied world of Surface Duo 2 accessories this is still notable and will suit me, a died-in-the-wool belt case addict, down to the ground for the foreseeable future.

PS. I do have some other belt cases arriving for review, but they're more generic, whereas this one is made specifically for the Duo range. Still, watch the Flow column for these in the next few weeks.

PPS. If you think the high score is slightly amusing, look at the price again. This gets bonus points for sheer value!